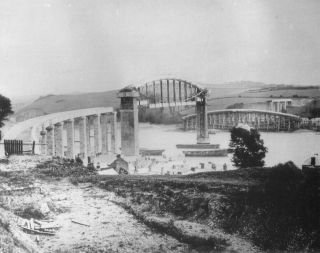 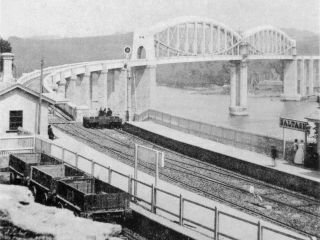 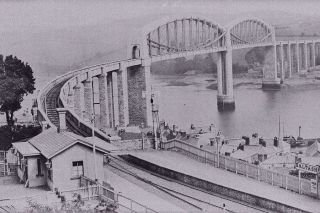 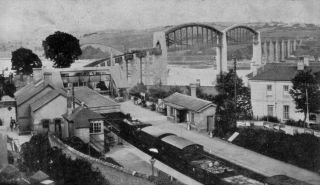 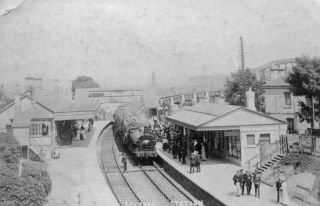 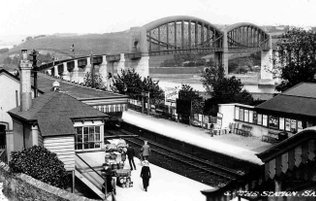 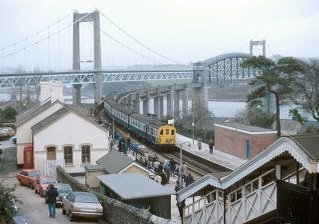 While looking through some old newspapers I came across the following article:-

Saltash Railway Station has recently received an award for having been one of the best-kept stations in the 1964 competition.

In the section for intermediate-sized stations, Saltash gained the third prize.

Many passengers at Saltash have praised the tidy gardens, waiting rooms and platforms.

Even during the recent trouble with late trains, passengers who were annoyed with British Rail pointed out that the local staff did everything they could to lessen the inconvenience.

Another unusual feature of the Saltash station is its advertising. Signalman Alfred Freeman is a skilful artist, and he uses his ability on advertising posters. Coloured posters appear at the station regularly with some witty comment, and especially if trains are delayed. Mr. Ackford, the stationmaster, said that the money the station had won would probably be used to make further improvements in the gardens of the station.

How times have changed!

But with the pending acquisition of the station building by Saltash Town Council maybe things are about to get better.

The original station and the Royal Albert Bridge were built by the ‘Cornwall Railway’ and opened in 1859. The Cornwall Railway operated trains between Plymouth Millbay and Truro. (5 each way on week days, 3 on Sundays) Passengers for London Paddington had to change trains at Plymouth, Exeter and Bristol. 3rd Class passengers for London had only one train. The 5.45am from Truro arriving at Paddington at 9.15pm. The time table reminds passengers that all trains run to Greenwich Time. That was 17minutes earlier than Plymouth time and 20 minutes earlier than Truro time.

The original C.R. Station at Saltash had very short platforms and small buildings with limited good facilities. The first big change came in 1889 when the GWR took full control of the CR. and started preparation for changing the gauge from Broad Gauge (7ft ¼in) to Standard Gauge (4ft 8½in). This took place in 1892 along with replacement of the main building on the up platform, extending the down platform under the Culver Rd bridge and building new goods facilities. These changes heralded the beginnings of commuter traffic which made Saltash Station one of the busiest in Cornwall. In 1961 the new road bridge opened and over the next 10 years there was a steady decline in rail traffic resulting in the station becoming unmanned in 1971. After a short spell of office use the building has gradually decayed.

Few if anything of the original station now exists but with the prospect of changes required to accommodate new trains and the existing building now in safe hands, could Saltash Station be on the verge of a new lease of life?

Between 1906 and 1908 major expansion took place at Saltash. Phase one was to extend the up platform westward. For this to happen, the bridge over Culver Road. had to be replaced with a wider bridge.

The GWR required the bridge to be replaced with the minimum disruption to services, stage one was to construct the new bridge alongside the existing one then divert the road over the new bridge before removing the old one.

When the new bridge was in place the parapet of the old bridge was carefully dismantled until there was only the arch left. Protective timbers were placed on the track and explosives used to bring down the arch remains (left) before a gang moved in to quickly remove the rubble.

The blowing up of the arch was watched by many locals who then crowded onto the new bridge to watch the clear up operation.

In the same year the signal box was expanded from 18 to 23 levers and plans were put in hand to build a new foot bridge in the centre of the platform so that the one at the eastern end could be removed ready for engineering work on the two western spans of the RAB.

In 1908 the new foot bridge was in place and preparation work complete. The two spans closest to the station were replaced with wider ones so that the point work could be moved from between the platforms onto the spans allowing the full length of the platforms to be used by passenger trains without fouling the points.

The last day of steam operation for the “Saltash Motors” was Sunday June 12th 1960, that last train pulled into Platform 6 at 10.30pm having run as empty stock from Saltash.  The Guard, the longest serving on the service, was Mr Arthur Cook the other Guard was Mr Philip Mumford. The two Drivers on the service were Mr Bill May, aged 63, and Mr David Lavers of Pennycross.  One of the last locomotives to run the service was No. 6421.

From Monday June 13th (when the summer timetable started) the service was operated by DMUs, except for those trains which ran through to Tavistock, the 1.25pm return to Tavistock South. Likewise the 4.30pm from Tavistock South formed the 5.23pm to Doublebois and remained auto-worked.

The first diesel train was driven by Mr Reg Beal of Laira. The opening of the road bridge in October 1961 signalled the end of the Plymouth suburban service to Saltash. Western National could now run buses from all parts of Saltash to Devonport and Plymouth with workers services direct to the Dockyard. Although some commuter trains still ran, the daytime services rapidly lost passengers to road transport and off peak trains were reduced to a minimum level.