On September 8th 2016 Saltash became the first town in Cornwall to have a Blue Plaque Trail.The initial seven plaques have been chosen to be around the Waterside end of Saltash.  Maps and information are available from Saltash Heritage Museum, Saltash Guildhall and tourist information offices 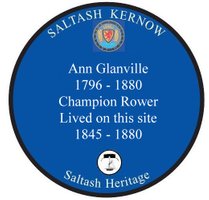 Champion oarswoman Anne Glanville acquired her rowing skills pulling the family boat to Devonport market. Between 1830 and 1850 she led a team of Saltash oarswomen at regattas throughout Britain and in France, reputedly unbeaten by women and seldom beaten by men. She met and was admired by some of the highest in the land and helped gig racing to develop into the popular sport that it is today. A true "Watersider", she had at least twelve children, some of whose descendants still live in the Westcountry. [MORE] 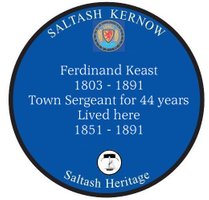 Ferdinand ('Nandie') Keast was born in 1803 and served as verger and town crier. However, he was rnost renowned for exercising Saltash's jurisdiction over the Liberty of the Tamar. As Town Sergeant he arrested wrongdoers afloat or on land, casting them into the Black Hole below the former Guildhall. These included five mutineers cast in irons by their captain. He recalled local celebrations of George III's jubilee, was to celebrate those of Queen Victoria, outlived three wives and lived above the 'Black Hole'. [MORE] 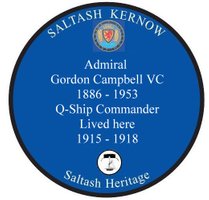 Admiral Gordon Campbell won a V.C. while serving in one of World War l's mystery "Q" ships disguised as merchantmen. Campbell allowed a German "U" Boat to torpedo his ship and to surface before sinking it and safely beaching his own boat. He also won a D.S.O. with two bars and was held to be the most brilliant exponent of this hazardous form of warfare. A Londoner by birth, he made this his home for his wife Mary, spending his leaves here with her. [MORE] 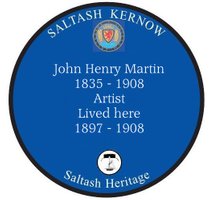 Born in Camberwell, London, Henry Martin established his reputation as an artist in Newlyn but moved to Plymouth in 1883 as the Newlyn School became established. He later moved to Saltash in 1897 where he painted a number of local scenes depicting the old Saltash Waterside buildings, later destroyed by war and post war redevelopment. Some of his works are held by the town council. He is buried in St. Stephens churchyard. [MORE] 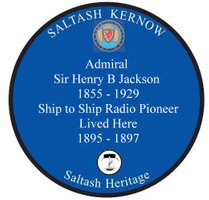 A pioneer of radio, Admiral Sir He, Jackson established the first ship to ship radio communication in 1896-97 while in command of HMS Defiance moored off Wearde Quay, Saltash. His work complemented that of Marconi with whom he compared notes but whose work had been on land. Born in Yorkshire, Jackson joined the Royal Navy in 1869 and lived here with his wife Alice while at Defiance. He was later appointed first chairman of the Radio Research Board and died in Hampshire in 1929. [MORE] 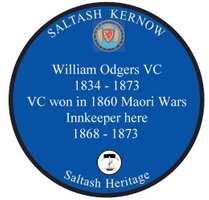 William Odgers V.C., born in Falmouth, enlisted in the Royal Navy in 1852. In 1860 he was one of the first "other rankers" to win the V.C. established four years earlier, and the first to win it through action in New Zealand. Following a cutlass charge on a stockade at Waireka Hill, Odgers hauled down the Maori colours. Having been invalided out, he served as a licensee at the "Union Inn" until his death in 1873. His Saltash born widow survived him and his descendants continue to live locally. [MORE] 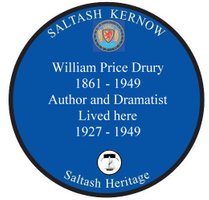 William Drury, who claimed London's Drury Lane to be named after his family, enjoyed a reputation as a playwright of several West End successes. He also wrote popular novels, some with a Saltash setting. Born in Plymouth, he served in the Royal Marines, reaching the rank of Lieutenant Colonel, and there is a Drury Room containing memorabilia in Plymouth's Stonehouse barracks. Mayor of Saltash 1929-31, he wrote pageant plays that attracted crowds to the town and was responsible for reviving the ancient Saltash Fair. He was made a Freeman of Saltash in 1935. [MORE]