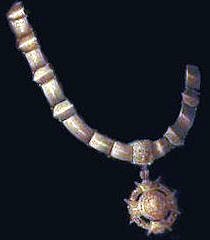 The chain worn by the Mayors of Saltash is made of 18ct. gold and has 40 links.

Nineteen of the links are the same type of shield. Three of them have crests engraved on the front and the names of the Mayors at the back. The rest - except for one - record the various Mayors, but one records a Town Clerk, F. W. P. Cleverton, who was in office from 1845 to 1883. One of the shields is not made in 18ct. gold.

The middle shield is of a different shape and records the ancient Water Court when ended on December 31st, 1893. It carries an ancient ship but with only one mast carrying a furled sail (the seal usually has a three-masted ship). The mast carries rigging and crossed oars. Fore and aft are posts flying triangular flags, as does the single mast. There is no anchor, nor wavy line, but just a bar.

From that shield is attached the fob. The seal on the medallion is based on the common seal used until 1886. It is in the shape of a St. John's cross with a raised circular container in the centre. (Some people suggest the container was for snuff - more likely it held the seal). The lid of the container shows the seal bordered by the words "Sigillum Saltasche Cornwaile". The centre shows a lion shield and supporters with a prince's coronet above. The supporters are ostrich feathers, associated with the Duke of Cornwall, and the base is water shown by wavy lines.

Connecting the arms of the cross are leaves. The fob is detachable.

The remaining twenty links carry three different patterns—a lion passant, a leaf pattern, and another depicting the rose, the thistle and the shamrock, the emblems of England, Scotland, and Ireland, but there is no Welsh symbol.

The Mayor wears full regalia on very few occasions, but the chain is in constant use when visiting the various organisation, concerts, fetes, and at the Town Council meetings.

Saltash is one of the few towns possessing a chain for the Mayoress, and it attracts much attention at the various functions.

It consists of nine different links, each commemorating an event in Saltash since 1919.

The fob is in the shape of a Maltese cross with a copy of the seal of the Water Court in the centre. This depicts a three-masted ship facing left with sails furled and anchored by the bow. It is bordered by the words "Sigillum Aquate Saltasche". It was presented by the Mayor at that time, Cllr. J. H. Pooley, J.P., and it was his hope that succeeding mayors might add a link and so form a Mayoress's chain. His name appears on the fob. In 1922 Mrs. A. Grenfell's name appeared on a gold emblem showing the fouled anchor surmounted by a crown and supported by the two ostrich feathers associated with the Duke of Corn­wall. 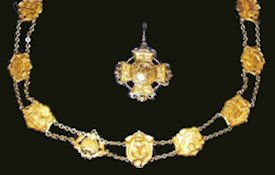 In 1923 Engineering Captain Bishop tried to revive the oyster fishing, and Mrs. Bishop's emblem shows the oyster shell on a fouled anchor and supported by two dolphins.

The Fire Engine records the office held by Mr. Venn who was captain of the Brigade, and many of the older citizens still remember "Mary" the fire engine.

Mrs. W. P. Drury has her name recorded on the emblem showing St. Nicholas' Church which, during her husband's term of office was renovated and then passed out of the custody of the Borough Council. The Mayor still has a reserved seat in the church and maintains the right to ask for the bells to be rung, up to a certain number.

Mrs. Venn's name appears once again as Mayoress to Alderman. Howard, 1932/33, when the Town Pier was renovated and so appears on the emblem.

Mrs. H. J. Davy was Mayoress at the time of the Silver Jubilee of King George V., and it is with pleasure that we can record that today Saltash has two Silver Jubilee Mayors—Cllr. Herbert Davy and Cllr. Victor Harding.

The remaining two links carry no names; instead they record two memorable events—the opening of the Tamar Road Bridge in 1961, and the final voyage of the Saltash Floating Bridge.