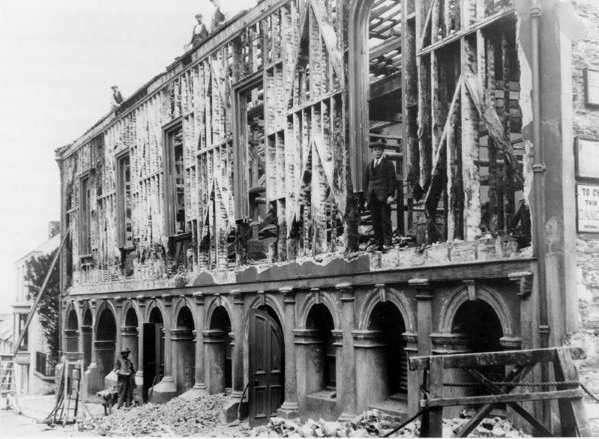 The reconstruction of Saltash Guildhall 1924

The Guildhall stands on a corner of what was once Saltash's medieval market place, Alexandra Square. The Guildhall building was formerly a Market House, which had on its first floor an assembly room known as the Long Room. The original Guildhall was situated at the NW corner of Alexandra Square, but was small and inconvenient. In 1841 Saltash Corporation decided to use the Long Room as the Guildhall of the Borough. (The old Guildhall eventually became ruinous, and was demolished in 1894. Its site is now occupied by the Essa Club building.)

The origins of the Market House are shadowy, but it was referred to in 1573. In 1775 it was rebuilt resulted in a building whose overall shape was virtually the same as that which exists today. The south and west walls consisted of masonry: possibly they were remnants of the earlier building. An elegant semi-hexagonal east end was built in brick (now hidden by rendering). On the northern frontage, (facing Lower Fore St) the ground floor market area was open to the street and had a colonnade of the Tuscan Doric order. The granite columns supported the north wall of the first-floor assembly room; that wall consisted of timber studding and brick clad in plaster. The building received some finishing touches in 1780, as the dates on two existing rainwater heads on the south side show.

The use of the ground floor as a pannier market continued until the end of the 19th century. A soup kitchen had been partitioned off at its western end by 1888, a fire station was formed at the eastern end in 1903, and in 1910 the remainder of the ground floor was enclosed. Much Victorian-style stucco-work was applied to the enclosing wall, but happily the granite columns were left exposed for half their thickness.

In 1922 an external covered staircase was constructed of reinforced concrete at the east end to provide an emergency exit from the first floor. While this work was in progress, it was discovered that much of the timber in the building was badly decayed. Plans were prepared for a partial reconstruction. The scheme was carried out in 1924. It included the complete renewal of the first-floor north wall and the roof. Major alterations were made at the west end to provide a new doorway and portico, new window-openings and fake half-columns - all in a style to match the north side. A gabled tablet was inserted in the western roof-hip and eaves; it bore depictions of the seals of the Borough of Saltash and the Liberty of the Water Tamar (this is now missing). The scheme also included extensive improvements to the interior of the Guildhall.

In 1952 the Guildhall was listed by the Ministry of Housing and Local Government as a building of special architectural or historic interest. Its 'Listed' status has continued to the present day; in the current list prepared by the Department of the Environment it appears as a Grade 2 building, also having 'Group Value'. 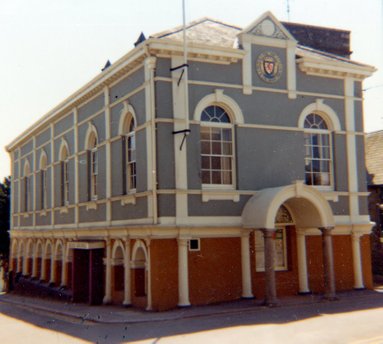 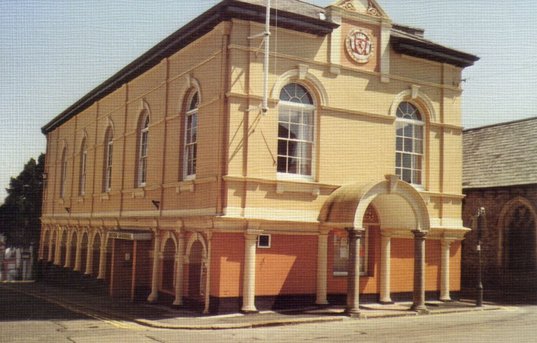