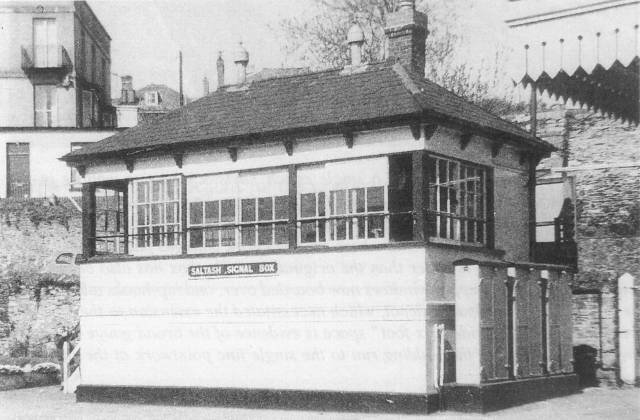 Saltash was a crossing station protected by disc and crossbar signals from its opening. In a report on the locking of signals and points on the Cornwall Railway dated 1868, it was recommended that the down signal should be shifted further out and locked with the points. The up signal was also to have been shifted further out, but it was inconvenient to lock that signal because the down line was used by both up and down trains for shunting purposes.

A signal box containing 18 levers opened at Saltash in January 1882. The Up Main facing points were worked from a ground frame near the yard entrance, which was bolt-locked from the box.

Coombe-by-Saltash Viaduct was renewed as a stone structure in 1894, with sufficient width for double track. In 1895 it was decided to construct an Up Refuge siding on the new viaduct. The connection was worked by a ground frame released by Annett's key, which was locked in the frame in the signal box when not in use.

In connection with the doubling of the line between Saltash and St Germans, a new frame containing 23 levers, all in use, was installed at Saltash in 1906.

To facilitate the working of special wartime traffic anticipated in the West of England during the run up to `D' day, a Down Goods Running Loop was provided between Saltash and Wearde in 1943. Saltash box was therefore extended and a new 31-lever frame installed. The entrance to the new loop was at the west end of Coombe-by-Saltash Viaduct; the points were motor operated, with power being provided by a hand generator. An illuminated diagram showing the six track circuits was installed at the same time.

"Is Line Clear?" must be sent for Down Express trains on receipt of the "Train Approaching" signal.

From the closure of St Budeaux West box on 22nd June 1952, the above two clauses were replaced with:

The Clearing Point for Up trains is the Up Starting signal, 353 yards in advance of the Up Home signal.

The Standard Instructions for the working of fixed signals at crossing stations must be observed. Up trains when crossing Down trains must be stopped at the Up Main Inner Home signal before being admitted to the station. Down trains to be dealt with under Double Line Block Regulation 4 or 5 as the case may be.

The Distant signal for the box in rear being permanently fixed at caution this Regulation will not apply to the acceptance of Down trains, but such trains may be accepted at "Line Clear" provided the line is clear to the Standard Clearing Point.

The "Warning" signal may be sent for Up trains but passenger trains must not be accepted when the Up Main line is fouled at the western end of the Up Loop Siding by a Down Passenger train crossing over or in connection with any other movement with a loaded passenger train.

The "Warning" signal may be sent for Down trains.

Trolleys when passing over the RoyalAlbertBridge must be dealt with under ETT Regulation 9.

WORKING OF DOWN GOODS LOOP

The Down Goods Running Loop is worked in accordance with the Regulations for Signaling Trains and Engines by Permissive Block as shown on pages 86-88 of the Book of Regulations for Train Signaling on Double and Single Lines. Attention is also drawn to the Special Instructions in the Appendix to No.6 Service Timetable.

A Down train must not be accepted after permission has been given for a train to be withdrawn from the Down Goods Running Loop. Before the movement is commenced facing points No.26 must be set for the Down line.

The facing points leading from the Down Main to the Down Goods Running Loop, lever No.9, are worked by motor. Westinghouse Brake and Saxby Signal Style C hand generators are in use with these points. A hand crank, to be inserted in the electric controller, is provided in the Signal Box. See pages 75-77 of the General Appendix to the Rule Book for General Instructions re emergency operation of electric point machines which must be observed in the event of any failure.

When "Line Clear" has been returned for a Down train an Up train must not be accepted until the Down train has cleared the single line.

Railcars would normally cross to the Up Platform before returning to Plymouth. If, however, the arriving railcar was late, and the signalman decided to start it back from the Down Platform, he would shout from the signal box window: "Plymouth Car the other side".

It will not be necessary for Drivers to sound the engine whistle as an indication that the engine or train has proceeded clear of the points in Down Main, as the Signalman is made aware of this by an indicator in the Signal BOX.

In the event of a failure of the track circuit to rear of the Down Advanced Starting Signal, the Handsignalman appointed at the Down Starting Signal will be responsible for handsignalling to the Signalman when a train proceeded clear of Loop points in Down Main, ready to set back.

In order to avoid engine whistling when trains have been set back clear in the Loop, the Guard or Shunter must give the necessary intimation to the Signalman, on the Yard telephone, when the Down and Up Main lines are clear, and the train is in clear of Catch point in the Loop.

Horse boxes, carriage trucks and other vehicles, must not be detached at this station or left on the Main line unless they are properly secured.

Valves are provided at each end of the gas main on the RoyalAlbertBridge to enable the gas supply to be turned off in an emergency. Each valve is fitted with a padlock, the keys of which are kept in boxes fitted with glass fronts to be broken in an emergency situated in Saltash and Royal Albert Bridge Signal Boxes respectively.

The Ground Discs controlling the exit from Nos. l, 2 and 3 sidings on the Up Side at Saltash must not be regarded as the fouling point. Staff are responsible for ensuring that vehicles placed in these sidings are not foul of adjoining roads.

When shunting movements are made at Saltash the following instructions must be observed by Enginemen and Guards.

2.When formation is Auto Engine (Wearde end) and two Trailers.

3.When formation is two Trailers (Wearde end) and Auto Engine.

For a movement from Down Platform over Down Main line to Up Main line or Up Loop, the Guard must ride in the leading vestibule of the leading vehicle, whilst the vehicles are being propelled.

In the event of any other shunting movements the Engineman or Guard must ride in the leading vestibule of the leading Trailer in the direction of travel.

When Trailers are propelled over the Down Line at Saltash, or to the Down Goods Line to be subsequently crossed to the Up Line, the headlamp must be changed to red before the Car leaves the Down platform.

Should, however, an Up train be signaled, the Trailers must be held at the Down platform and the headlamp must not be changed to red until the Up train has passed, or has been brought to a stand at the Up Home signal, as the case may be.

The tail lamp (which will become the headlamp for a movement in the direction of Plymouth) must be changed to white on arrival at the Up platform.

This instruction modifies the provisions of Rule 152 (b).

INSTRUCTIONS FOR WORKING TRAINS AND ENGINES OVER THE DOWN GOODS

LINE SITUATED BETWEEN SALTASH AND WEARDE.

1. The gradient of the Goods Line varies but for approximately 15 chains from the points at the entrance to the

Goods Line the gradient falls 1 in 480 and Clause 9 (b) of the Regulations for Train Signalling by the Permissive Block System will not apply.

2.As soon as any train or Light Engine has passed on to the Goods Line and is clear inside the catch point it must be brought to a stand with the brake van or Light Engine as near as possible to the telephone box.

3.No loose wagons must be detached and allowed to stand on the Goods Line except in case of emergency when steps must be taken to clear them at the first opportunity. After sunset or during fog or falling snow a red light must be exhibited on the rear and a white light on the leading end of such vehicle or vehicles. 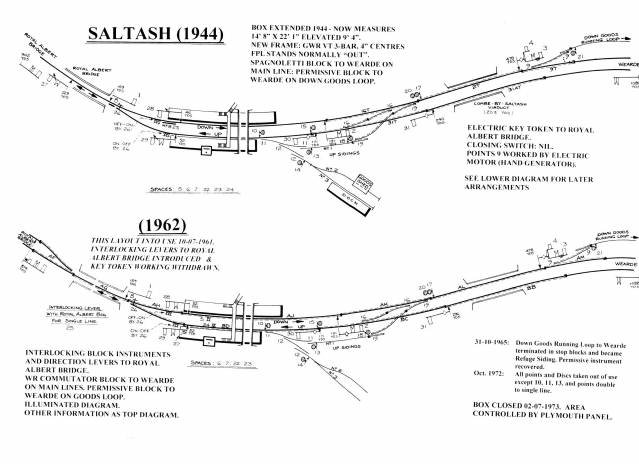 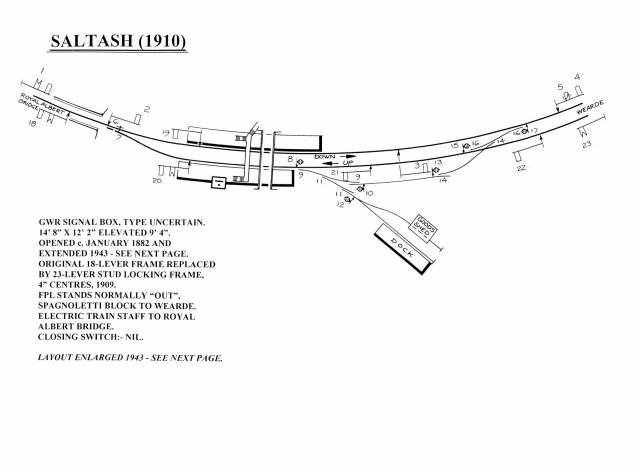