On Tuesday August 2nd 1926 a public meeting was held at the Y.M.C.A. in Fore Street to consider forming a branch of ‘The Cornwall County Free Library Scheme in the town, a local committee was formed and in September Mr. R.J. Lucas was elected Horary Librarian. The library was to be housed in the YMCA and the County Librarian was asked for 100 books to start the library.

Initially the library was open for two nights per week (Tuesday and Saturday) from 7 to 8pm, after six months the librarian reported that 153 people had become borrowers and an average of 25 books being issued each evening it was open, he also reported that 272 books had been received with a promise of more to come. By June 1928 the library had 819 books with 260 borrowers averaging 40 books per evening. Twelve months later the library had 1610 books from the County and many reference books from the Central Library for Students in London on such subjects as chemistry, banking, building and construction.

The library continued to grow and with so many people using the YWCA’s premises they thought that the library should contribute towards the buildings running costs, as the library had no financial assistance and no funds they were asked in October 1930 to quit the premises. For a short period the library was closed but in early 1931 accommodation was found for the library in the Council School for Infants, although not as convenient as the YMCA and with poor access membership continued to grow.

The search was on for better accommodation saw the library move from the Council School to the school room at St Nicholas Church and then to Church House in 1953/4. However, with increased borrowing, more books to store and longer hours it proved more than the volunteer helpers could manage and part-time Librarian was appointed, and shortly afterwards a full-time trained librarian took over.

In 1960 plans were in hand for a new permanent library and the architect, Mr. Royston Summers was appointed to design the present building, at that time he described it as

He went on to say,

"The object of means by which practical realisation may be given to the need for efficiency and harmony in dimensions of objects in architectural design".

Saltash Library is in the LINEAR SCALE which means in the form of a tape. The perspective would be from the side where the roof forms a "Y".

The number of books issued in 2010 was 119,774, this number is down from its peak but is only the number of book issued and does not include the many other storage mediums that are now offered by the library which resulted in over 90,000 visitors in the year.

The library was nominated in the Times newspaper for an award, it was open to members of the public to recommend the most interesting modern buildings built since 1940 which would be suitable for 'listing'. The library came second. It was later discovered that it was Mrs. F. Forster, the architect's mother-in-law who has submitted the recommended.

Although Saltash got its first ‘Cornwall County Free Library’ in 1926 Saltash Mechanics Institute had a library for members from as early as 1883. St Nicholas and St. Faith Church started a library for parishioners in 1902 with 200 books and also in 1902 the Co-op opened a library for members in a room above their shop at 113 Fore Street with 150 books and 56 readers, access was by stairs at the rear of the building through the passageway that now leads to Alexandra Square, by 1912 the Co-op library was issuing 31,000 books a year 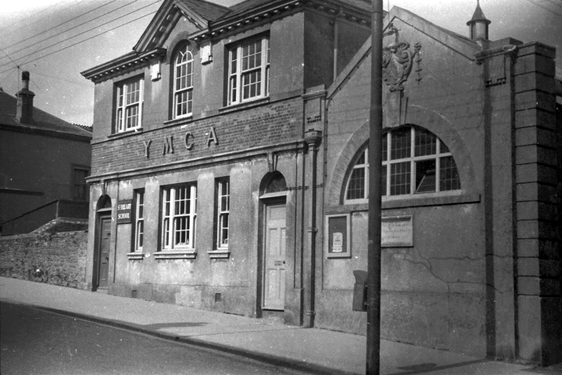