A shortage of gas in Saltash

When Saltash had its own Gas Company one of its tasks was to order coal to keep the supply of gas flowing to the town. The company’s usual supply of gas coal was from Newcastle being shipped by collier via the North Sea and English Channel to be unloaded at the Town Quay. The coal was then moved by wagon to the gas works, which was on land just behind where the Sailing Club is now. 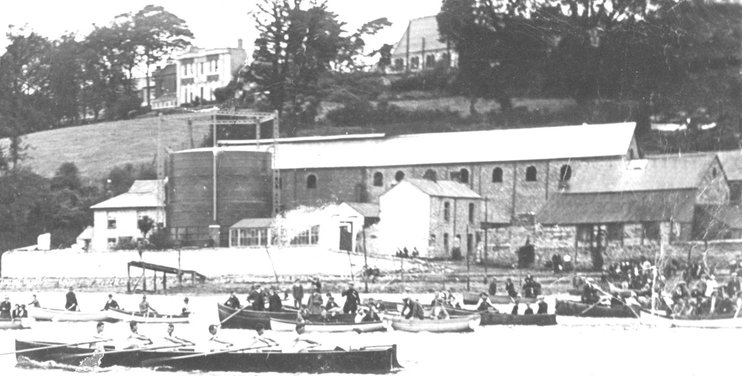 Normally there was no problem with the supply of coal but during WWI supply could became intermittent with delays due to enemy attacks on shipping and mine fields.

In November 1914 the Saltash Gas Company ordered a shipment of coal that never arrived. On 8th February, 1915 the Company recommended to the Town Council that until a cargo of coal ordered in November arrived the street lighting should only he used from 6.00 p.m. to 10.00 p.m. By the end of February thing were becoming desperate but on 5th March to the relief of the town the steam collier 'Thordis' arrived at the Town Quay with a cargo of gas coal.

The ship’s Captain had an interesting story to tell…..

The British suffered massively during the first year of the war at sea. Being in many respects totally unprepared for Submarine warfare. Things came to a head with the public outrage over the destruction of half of the 7th Cruiser squadron by a single U-boat on the 22nd of September 1914. The loss of 1459 sailors only added to the public shock. The 7th Cruiser squadron had been engaged in protecting allied shipping along the coast and across the channel. As losses increased new ships were sourced from other nations. One of these was the SS Thordis, a 500 ton steamer from Norway. On the 25th of February, 1915 she was transferred to English registration.

Captain John William Bell took command of the ‘Thordis’ and departed Newcastle with a cargo of coal for Saltash.

At 09.30 Sunday February 28th 1915 the ‘Thordis’ was steaming down the Channel when the periscope of a U-boat was sighted off the Starboard side of the ship. Captain Bell proceeded to stop his ship and observe the U-boats movements, which slowly preceded across the bows of the Thordis to a position about 30 to 40 yards away on her Port side. Suddenly the U-boat altered course and at a distance of some 700 yards the track of a torpedo was seen. When it had almost reached the vessel, a wave lifted her stern clear, and the torpedo passed harmlessly underneath. Captain Bell then ordered his ship to immediately close in on the U-boats position and ordered all hand up on deck. There followed a crash, then a scrapping noise, and the submarine was believed to have been sunk. With a large gaping hole in the ships bow just above the waterline from the force of impact, Captain Bell made for the safety of Weymouth. 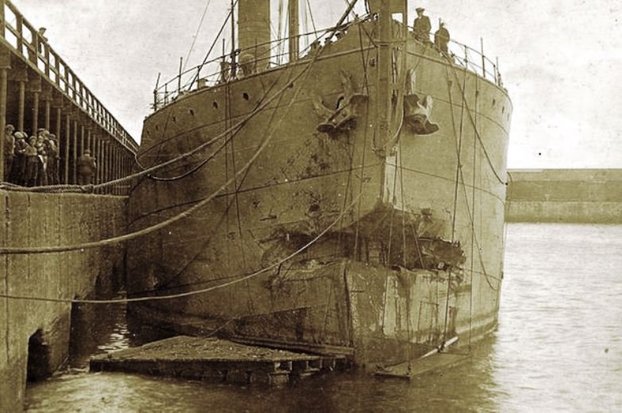 The SS Thodis in Weymouth after ramming a German submarine

After returning to port news that Capt Bell's ship had become the first to sink a German submarine got out and he and his crew were given a reward of £860 Captain Bell received the Distinguished Service Order by King George V at Buckingham Palace, an 18 carat gold watch and he was given a celebratory dinner at the Mansion House in London.

Capt Bell was mentioned in despatches a month later. The write-up in the London Gazette read: "Lieutenant John William Bell, Royal Naval Reserve, of the steamship 'Thordis' for his gallant and spirited conduct in ramming a German submarine, which had fired a torpedo at the 'Thordis'."

(He was given the honorary rank of Lieutenant, Royal Naval Reserve after the incident) 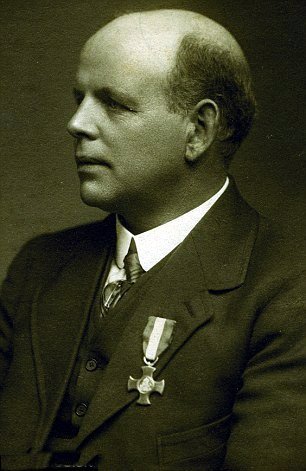 Captain Bell of the SS Thordis

Despite the British claims, the German submarine, SM U-6, wasn't sunk. She'd suffered damage, including losing her periscopes forcing them to abort their patrol and returned to port with the news.

The German authorities were outraged at the idea of Merchants attempting to ram their submarines, and claimed the attempts were outside international law.

They also issued a photograph of the submarine and its crew to prove that it hadn’t been sunk. 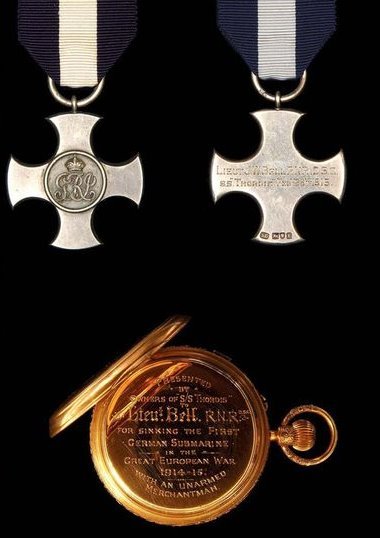 The DSO and watch received by Capt. Bell 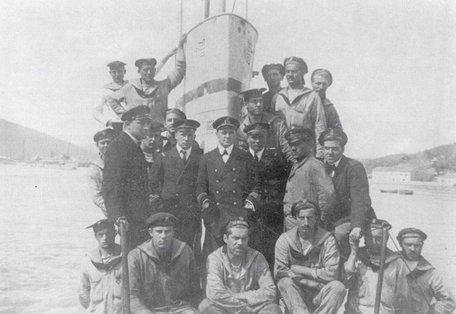 Crew of the German submarine