The last lockdown forced me to get creative with my social distanced walks! Especially when the weather was nicer, my local streets were full of families, dog walkers and runners all getting in their exercise. Getting fed up with constantly crossing the road and squeezing myself into small spaces to allow a couple to safely pass, I found myself in St Stephen’s churchyard. The peace and tranquillity it offered gave me space to think and more than fulfilled the 2-meter rule!  As I walked, I began to think about my present company. A graveyard can offer us an abundance of information about their residents and can be much more than a marker of a person’s final resting place. On a simple level they show us names, dates and, sometimes, other family members. However, if you look closer, they can reveal a deeper insight into the lives and deaths of the Victorians.

If you stand in the middle of St Stephen’s cemetery, and look up and down you can literally see the evolution of history. You can track ideologies, beliefs, traditions, and fashion of our local people over the last 300 years. This can all be done with just a casual sweeping look across the land. There are not many places in the world where one can do this.

During the Victorian era, there was monumental economic and societal change due to the industrial revolution. A rigorous class system and strict religious beliefs dominated the day to day lives of most people. This was also the time where notions around death changed. In 1861 Prince Albert died, sending Queen Victoria into 40 years of mourning. This sent ripples across the country leading to many of the rituals we know of today, such as mourning etiquette, a rise in spiritualism, post-mortem photography, pet cemeteries and elaborate headstones.

St Stephens is home to these early, comparably simplistic headstones from 1766 and 1779. They are much smaller, thinner, less decorative and contain less information than their Victorian relatives.

Before this time, people were often buried close to home, with simple markers such as stones or flowers. Those who were buried in consecrated ground within the boundaries of a graveyard with markers, were done so based on social or religious standing. Others were placed in mass graves, which were regularly dug up and refilled. Out of town burial sites became popular due to overcrowding and unsanitary conditions and the legalisation of cremation in 1902 changed the makeup of the cemetery to what we know today. 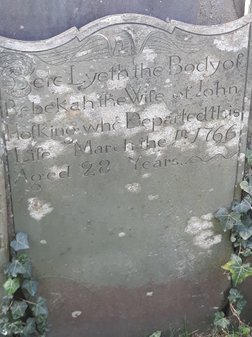 St Stephens is home to these early, comparably simplistic headstones from 1766 and 1779. They are much smaller, thinner, less decorative and contain less information than their Victorian relatives. 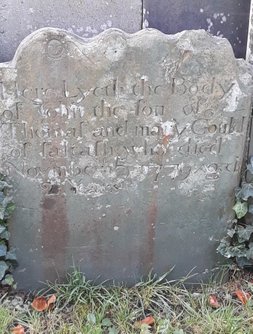 Victorian headstones became more expensive and more elaborate than their predecessors. They represented not only a memorial for the dead, but as a symbol of social status and beliefs. People would save up money through their lives to pay for a fitting memorial for themselves and their family. And elaborate markers were no longer just for the upper class. Due to this, the Victorian fascination with death has left us with a wonderful collection of information we can use today to find out about the people and their families lying in our local cemeteries.

Firstly, as I mentioned before, the Victorians were deeply religious people and their cemeteries are littered with religious symbols. Images depicting bible scenes, crosses, and the symbol IHS. (The first three letters of Jesus' name in the Greek alphabet. It has also been interpreted to stand for 'In hoc signo' which is Latin for 'by this sign we conquer'). There are many styles to be found, some simple and some incredibly intricate. 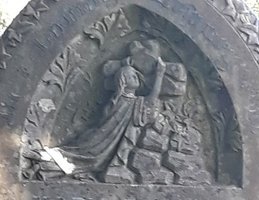 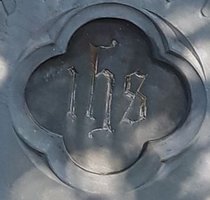 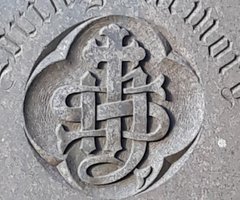 There are many styles of crosses in St Stephen’s. Some are carved onto headstones and others act as the marker themselves. The variety of crosses just in St Stephen’s is incredible. One beautifully carved cross includes a representation of “the messengers of god" which are shown escorting the deceased to heaven. Another has been carved to look like wood, covered in ivy and leaves, and there are even a variety of Celtic crosses. I could write a whole piece just on cross styles and meanings! 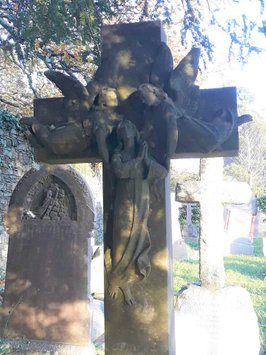 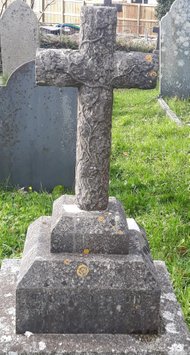 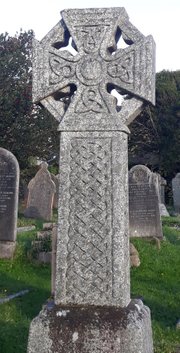 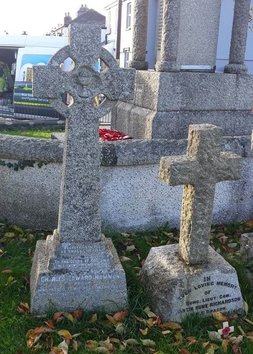 Victorians were pioneers in Floriography; the language of flowers. Using flowers to express feelings and send messages. Each flower had its own meaning and use in communication. This, of course, transpired onto their headstones. As well as serving a decorative purpose, these flowers and plants have hidden meanings. There are flowers related to the person’s qualities such as daffodils to represent grace and beauty, Buttercups for cheerfulness, oak leaves for strength and honour and ivy symbolizes friendship and faithfulness. They also act as religious symbolism. Palms for peace and eternal life, wheat for resurrection and mistletoe for immortality. Also, the symbols can represent the living’s feelings. The weeping willow clearly indicates sadness and perpetual mourning. 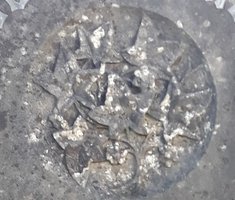 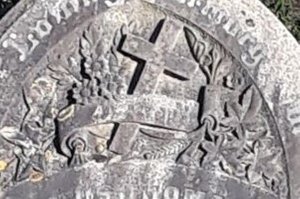 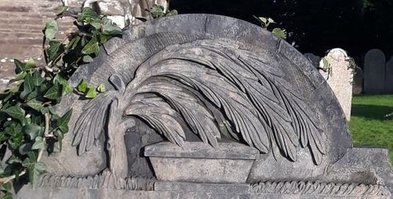 The most prolific and easy to read flower symbol is the rose. A full bloom shows a full and long life, a partially opened rose show a teenager or young adult, and a bud for a baby. Due to high infant mortality at that time, there are many headstones with this symbol. A popular scene shows two intertwined roses which found on couple’s graves show a strong bond. Cut roses show untimely or sudden death, which was something sadly common. These headstones really do tell a story of family relationships and the frafility of life. 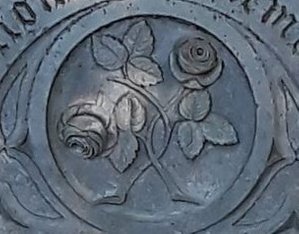 These full bloom roses, which intertwine, adorn a man and wife’s grave, who both died in adulthood. 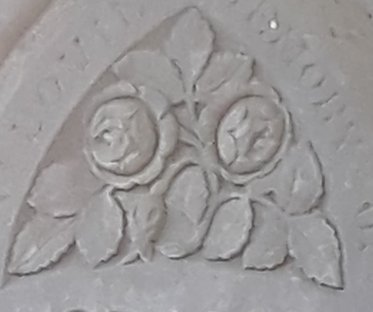 Hands are largely featured on headstones. If you spend some time looking you may come across clasped hands. These show a husband and wife’s bond in life and into death. These can often give us information about the deceased, without reading the names. Depending on the wear and quality of the carving you can see which of the couple passed first. By looking for clues in the hands and the sleeves you can decipher the gender of each hand. The hand on top represents the first to pass in order to lead the other into heaven, when the time comes.

This heads the stone of a woman and her baby. who passed 11 weeks after. The sickle cutting the bloom and the bud emphasises the tragic event and reveals the feelings of the husband left behind.

A 22 year-old woman’s grave. With some research I found she was recently married and had a baby. There is an uncut bud which could represent the young one 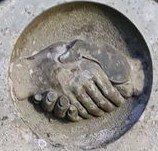 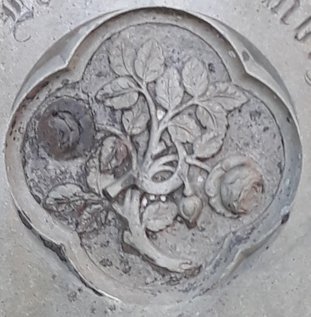 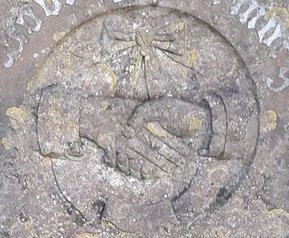 Some of the more interesting symbols on the headstones nestled between their more common counterparts are those of masons. The curious symbology catches one’s eye and with a little research we can pull out a wealth of information on those memorialised below. 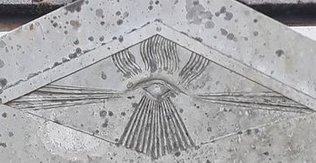 The All Seeing Eye is synonymous of the mason community. With a little research, I found this individual has his occupation named as Stone Mason

Being close to the water, and with Saltash being such an important port, there were many seafaring people with strong links to the sea. It is unsurprising that there are many anchors to be found in St Stephens. Broken chains can symbolise a life cut short and life lost at sea. Early Christians used the anchor as a secret symbol for the cross during the Roman persecution to show others in the know of their faith. This anchor found in St Stephens is unfortunately not a secret Christian code, but for the boys who died during their service on the Mount Edgcumbe training ship anchored in the Tamar. 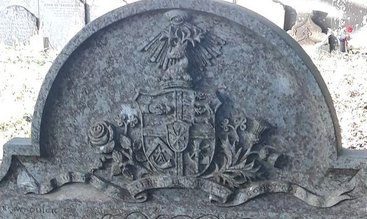 This illustrates the emblem of the Ancient Order of Foresters: This headstone shows the owner was a member of Pride of the Tamar court 3859, group in Saltash. And the eye makes it appearance here too! 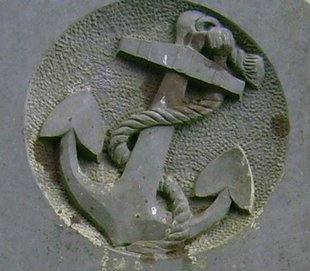 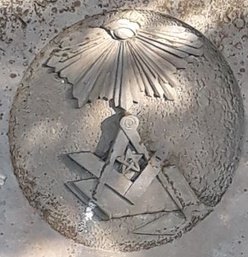 This one also features the All Seeing Eye as well as a Set Square and Compass, which are lknown as Masonic symbols, but could also indicate the tools of a stonemason. This also includes a star, of which the five points represents five Biblical women and their virtues. 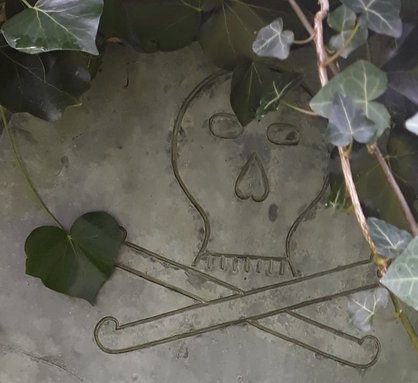 And last, but not least, if you are very lucky, you may come across this rare design hidden in the ivy. You may be mistaken in thinking this is a grave of a 18th century pirate or a plague victim. I use the word rare, as this stone in engraved with the date 1747. These “memento mori” skull and crossbones were common in the 16th century. During the Neo-classical movement along with the age of enlightenment in the 18th century saw the skull substituted by a cherub’s face and the bones with wings, to suit the newly fashionable ancient Roman and Greek style. So, by the time this stone was erected it would have been very out of fashion! Maybe he was a pirate after all?

So, next time you visit a graveyard, take a moment to look out for some of these most popular Victorian symbols. By taking time to read and decipher the stones you can get to know more about our 19th century neighbours. At first glance it is a stone, with a list of names and dates. Look deeper, and their social standing, personality, family, religion, loss and even jobs are revealed.  What other historical remnants can offer all this?

I have only covered a handful of symbols in this article, so why don’t you go out and find some of the other popular Victorian symbols. Such as urns, fingers, and birds. What else can you find?