Originally a butchers shop, (you can still see the meat hooks in the cornice), the building became a grocery store in 1880. At this time Harry Elliott, aged 21, was working in the grocery trade and living in Fore Street, Saltash, just a short walk from this building. However, the tale of Elliott's Store really begins on Boxing Day 1895 when Harry Elliott married Laura Ede in Tinta¬gel Cornwall. The couple and their three children moved to this building, owned by Laura's uncle Richard Miller, in 1902 and the name of H. Elliott appeared over the door of the business for the first time, where it has stayed to this day, It is said that Francis Ede Elliott, the eldest of twin boys by twenty minutes, aspired to become an engineer.

However, it was Frank who helped his father run the family business. Close to the town's main means of transport, the river and the railway station, Elliott's Store was in an excellent position and enjoyed a healthy trade, supplying the wealthy townsfolk on the Portview Estate. Six decades later, when in his late seventies, Frank disagreed with decimalisation and the introduction of the business rate and closed the doors for the last time.

Frank Elliott decided that, to avoid the introduction of the Business Rate, his father's store should be preserved as a museum. The matter went to Court a number of times until, in his nineties, Frank won the day and the Store was declared a museum, Frank discussed his plans for the museum with many organisations over the years until he met with The Tamar Protection Society, who had saved Mary Newman's Cottage in the town, and they agreed to maintain it after his death, 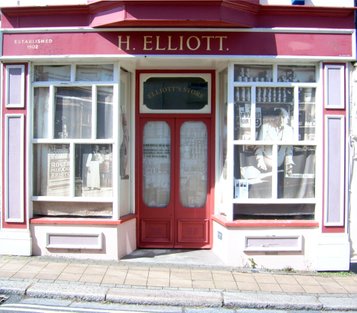 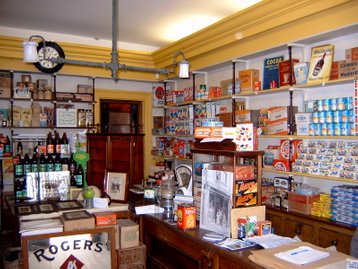 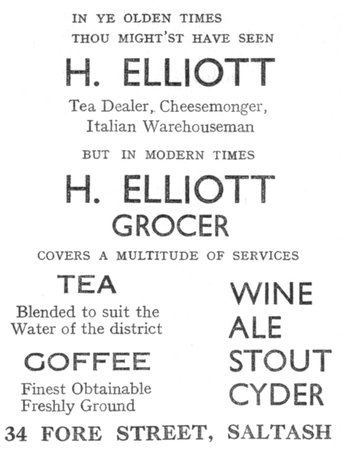 Frank Elliott spent nothing and saved everything. The building had been ravaged by two World Wars and gen¬eral neglect, and the fact that the store remains so authen¬tic is almost a miracle. Along with Frank Elliott's estate, a successful Heritage Lottery Fund application and funds from private sources were needed to restore the building throughout. At the time of Franks death Plymouth City Mu¬seum took over 1500 items of personal effects and social history into storage. Some of these pieces have returned to the building over the years and serve as the backdrop to create the atmosphere of the Elliott family home. Many items such as family letters and photographs, holiday slides and guide books, and shop point of sale and ledgers remain here, and ensure that the work of our volunteers to build up the picture of the Elliott family life continues.

The history of the Elliott family and the building in which they lived is told in words and pictures in the Exhibition Room, from Frank's recollections of his experiences during the Great War through to the building of the Tamar Road Bridge and the compulsory purchase of much of his prop¬erty. Helped by distant family members. local organisations and part funded by Saltash Town Council, the Societies vol¬unteers continue to create the Exhibition that Frank would have wanted in his Museum. Elliott's Store is situated opposite Saltash Guildhall in Lower Fore Street, which is the first left hand turn in Cornwall from Devon, just off of the TamarRoadBridge. Saltash railway station is dose by and car parking is available nearby, in Alexandra Square. Regular ferries from Plymouth arrive at Saltash Waterside, a short, but steep, walk away.

Should you wish to volunteer to help with this ongoing project please speak to a Steward or contact the Society at info@tamarprotectionsociety.org.uk.