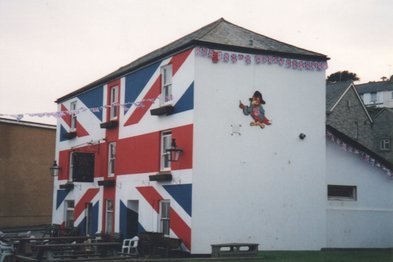 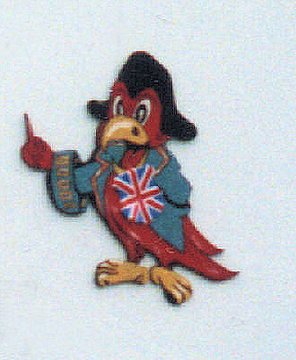 Very few, if any had seen him actually smile. He quickly took charge and put Fred and the parrot on the front seat of his police car, switched on his flashing lights and siren and quickly drove just up the road to the vets.  Being a Sunday morning the surgery was not open, but displayed a phone number for anyone to call in an emergency.  Sergeant Pentreath, knowing his town so well, knew where the local Veterinary Surgeon lived and raced up to his house in Frith Road.  This being a cul de sac it was rare to see a police car racing round the corner, lights flashing and sirens blaring out. It drew quite a bit of attention of which I was unaware as we lived right

The painting of the ‘Parrot’

that is on the side of the Union Inn.

at the end of this road. Unfortunately the police car came to an abrupt halt right outside my door. Being the vet’s wife and him being out calving a cow, I was a little concerned, as Sergeant Pentreath raced down my front path.

This story starts on 19th July 1970, a Sunday morning and the Saltash annual regatta is in full swing.  The sailing boats are out on the water and the crowds are lining the river bank.  It is always traditional for the starting gun to go off at the beginning of each race. The Union Inn was open for business with Fred Johns, the landlord, behind the bar.  On the bar was his prize possession ‘Mary’ his African Grey Parrot, a good talker who Fred had owned for 14 years. Although nervous of loud noises she was contentedly sitting in the bottom of her cage, when an extra loud bang came from the starting gun. The poor parrot must have had a heart attack as she was seen to fall over in her cage with her feet in the air. An extremely upset Fred Johns, demanded the police be called in, even though he said he did not blame the regatta committee. On duty that day at the regatta was Sergeant Pentreath a very well-known upholder of the law, who stood no nonsense and ran the Saltash Police Station with military precision.

Opening the door I looked at the poor man who had tears in his eyes, I have to say of laughter,r and he had to stuff his fist in his mouth, whilst trying to tell me, ‘it was a dead parrot, definitely a dead parrot’.  I suddenly remembered the John Cleese sketch about the dead parrot which had aired on the television the previous Christmas.  He struggled to tell me, that he had Fred in the car holding a dead parrot, and insisting it was most certainly a dead parrot but Fred had insisted it needed to be seen by the vet. Having just had a call to say the vet was returning to the surgery to sterilise his instruments, I told Sergeant Pentreath to go back down to the surgery as he would be seen immediately. The poor Sergeant had to walk backwards towards his police car, as he still had not managed to remove his fist from his mouth from laughter. However, as he reached the gate he took a deep breath and swung round to face Fred and the departed ‘Mary’. The police car shot off with lights flashing and sirens blaring out.  I understand Mr. Vet was able to calm the proceedings and assure Fred that Mary had died and that there was nothing that could have been done, however he was also assured that she did not suffer.

This is not the end of the story, as the following year, in 1971, at the opening ceremony of the Saltash Regatta, the Mayor. Ald. Vic Harding asked everyone to observe a minute’s silence when the starting gun was fired, in memory of the parrot who died of a heart attack at the previous year’s regatta, They were also told that the parrot, owned by Mr. Fred Johns of the Union Inn, had since been stuffed.

I hope that answers your queries as to why there is the image of a parrot above the mural painted on the side of the Union Inn, in memory of ‘Mary’ the well-loved Parrot who died suddenly when hearing the starting pistol at the Saltash regatta.