HOW a three-foot jagged fragment of stone weighing about 801b. fell from the Royal Albert Bridge, crashed through the roof of a washhouse at Saltash, and wrecked a white enamel bath.

The stone damaged property at Huntley Cottage. Silver-street, Saltash, occupied by Mr. and Mrs. Arthur S. Budge and their four children. A second stone fell while railway officials were inspecting a pillar. This smashed a washing copper.

Mrs. Budge said she was having a meal with her four children yes­terday as the 1.20 p.m. train from Saltash to North-road passed over­head.

"Suddenly there was a terrific crash and I thought a bomb must have fallen. We all ran out to look and at first could see nothing. Then my son said: ' The washhouse roof is looking funny,' so I opened the door and looked inside. I saw a gaping hole in the galvanised roof and there was a big stone jutting up through a hole in the middle of our bath."

Mrs. Budge said she and her children spent a lot of time in the washhouse, which is only a few feet from their home.

"On rainy days the children spend long periods sailing toy boats in the bath in the wash-house.

"It was lucky this did not happen last week. We had visitors then and the washhouse was in use nearly all day long. We often get small stones falling down, but nothing like this has happened before."

An official of the British Rail­ways commented: "It is true that a small piece of stone which had become weathered fell off and pierced a corrugated iron roof. Limestone gets a bit scaly, and it is the kind of thing that is liable to happen anywhere.

"The bridge (which was built by I. K. Brunel) is constantly in­spected, but, after all, it is almost 100 years old. It was only a small piece of stone, but falling from that height it was bound to penetrate.

"Train services were not delayed." 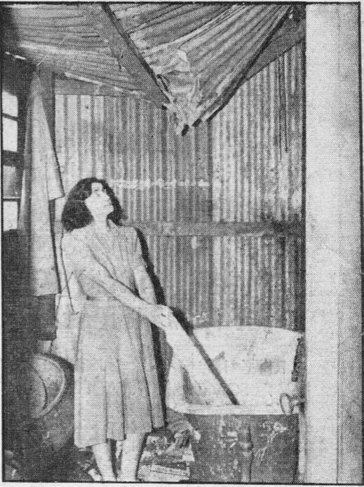 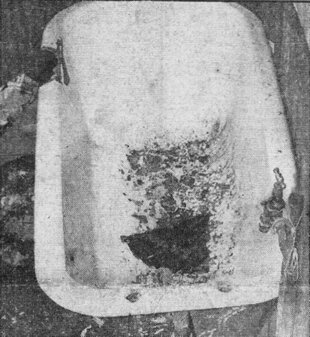 The day stones fell off the bridge