Review of the book 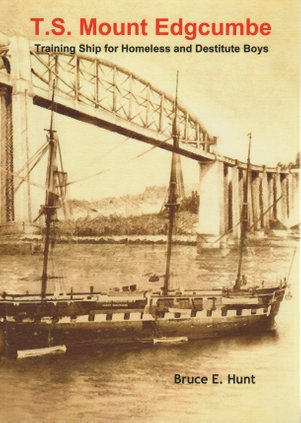 TS Mount Edgcumbe was operated under the Industrial Schools Act, 1866 (and successor legislation) by the Devon and Cornwall Training Ship Association between 1877 and 1920. Throughout this period she was a stationary vessel moored in Saltash Passage just north of Brunel’s railway bridge. Between 1861 and 1876 she had been the fee-paying officer cadet ship HMS Conway. Originally, she had been completed at Woolwich in 1822 for the Royal Navy as HMS Winchester. She was broken up in 1921 at Queen Anne’s Battery, Plymouth.

Thus for over forty years, she and her boys were a familiar sight on both sides of the Tamar and, in the years before World War I, her work was visible at Channel ports during the summer through her sea-going tender, the brigantine Goshawk. She was the South West’s contribution to a national network of some twenty charitable training ships. At its peak this numbered two officer cadet ships; and for training ratings, there were eleven industrial training ships, three reformatory ships, and five other stationary ships.

As far as is known, this book is the first devoted solely to Mount Edgcumbe, and its publication will be a boon to descendants of inmates who discover the connection in their family histories, as well as to those interested in the local history of the Tamar valley, and in the social history of seafaring. About two thirds of trainees came from other parts of Britain, especially London, and in later life some found their way abroad, notably to Canada. Thus from far afield, local history libraries in the area and maritime historians (including SWMHS), receive a steady trickle of enquiries for information about the ship. This book will provide all the background sought, but not, unfortunately, the register entries for particular individuals, which were especially detailed for this class of institution. It is believed that the ledgers were lost during World War II. Transcriptions from the 1881, 1891 and 1901 censuses are, however, included in the book.

The volume, in A4 format, is essentially a source book, as much of the content comprises transcriptions of surviving contemporary descriptive writing and documentation. Recent diligent searching has added to the small amount of surviving material about the ship and her function. The reader will gain a full understanding of Mount Edgcumbe’s management and operation from the description of the regulatory framework, visitor’s reports, inmates’ reminiscences, letters from old boys and the seventeen documents presented. Altogether, there are one hundred illustrations which additionally include two sections of charts of Saltash Passage, twenty-one pictures of the ships, and fifty-eight other pictures, mostly of activities aboard Mount Edgcumbe or her tender, Goshawk. Their quality is very good.

Bruce Hunt brings much sympathy to the subject from his background, having risen in the Navy to Chief Petty Officer Weapons Electrical Artificer, and as Vice Chairman of the Tamar Belle Heritage Group. He has made a welcome contribution.