The Legend of Tamara

The legend behind the name involves a nymph by the name of Tamara, who lived in the underworld. Tamara wanted to wander freely in the mortal world, against the advice of her parents. One day, wandering in Dartmoor, she happened to meet two giants called Tavy and Torridge (or Tawradge). Both giants became smitten with Tamara and vied for her affections. Tamara led the giants on a dance, but never let them touch her, instead darting out of reach whenever they came too close. Tamara's father, who had been out looking for her, located her just as the giants finally caught up with her near Morwenstow. He flew into a rage and used a spell to put Tavy and Tawradge into a deep sleep. This infuriated Tamara, who subsequently refused to return to the underworld with her father. He became even more enraged and cast a spell on Tamara, turning her into a bubbling spring, which produced the Tamar river and flowed all the way to the sea. Tawradge awoke to find his beloved had become a river; in despair, he sought the advice of a magician, who turned him into a river (the River Torridge and the River Taw) so that he could hope to reunite with Tamara. Tawradge was never able to find and merge with his beloved Tamara, instead turning north toward Bideford and the Bristol Channel and is still said to mourn his love, the Tamar. This legend explains why the River Torridge, which rises only 500 meters from the Tamar, veers away from the Tamar and forms a huge arc, eventually flowing to the North Devon coast. The other giant, Tavy, also awoke in despair and sought the aid of his own father, also a powerful magician. His father turned Tavy into a river as well, and the Tavy set off in search of the Tamar, eventually finding her and merging with her into a wide and beautiful estuary. 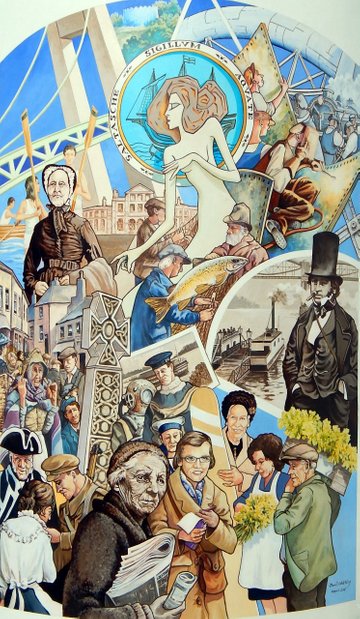