The evolution of the Royal Naval Dockyard at Devonport benefitted Saltash when the Saltash shipbuilder ‘Snook’ was instructed to build two 16 gun sloops for the Admiralty. However Snook proved an unreliable contractor and was paid off by the Admiralty and the job was handed over to Mr. Chitty.

Alderney (spelt Aldernay on the drawings) was 230 tons and 88ft 4ins in length with the Tamar being slightly larger, (see left).

TAMAR accompanied Capt. Hon. John BYRON in DOLPHIN on a circumnavigation of the globe, sailing on 21 June 1764 during which Capt. BYRON took possession of a group of islands in the name of George III in January 1765 and called them the Falkland Is. The circumnavigation took two years with the ships returning in May 1766

1767 Capt. Anthony HUNT, accompanied by FAVOURITE, and SWIFT, were sent out again to the Falkland Islands to establish Britain's claim to their sovereignty

James MONTAGUE took command of the ship on 11 Sept. 1773 after being promoted by his father (Admiral John MONTAGU) first to Lt. and then Commander.

The ship was renamed Pluto in 1777 and converted to a fire-ship.

As PLUTO, under the command of Cdr. James BRADBURY she was with the British fleet under Admiral KEPPEL seeing action with the French off Ushant on 27 July 1778 (the other fire-ship present was VULCAN). 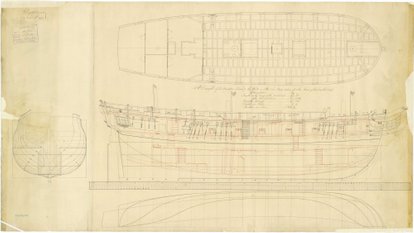 (A fire ship was a ship with a crew that were specifically trained and armed to use their guns with the specific intention of killing and maiming the crew of an enemy ship, as opposed to the usual aim of disabling a ship)

Josiah & Thomas Brindley launched Tamar at Frindsbury in 1814. She arrived in Halifax, after 75 men died of fever, including Captain Arthur Stowe. She was driven ashore on the coast of Labrador, British North America, in early August 1819, but later was refloated. Under the command of Captain George Richard Pechell, she captured a large pirate brig near San Domingo in 1820. She was part of the failed settlement on Melville Island at Fort Dundas in the Gulf of Carpentaria.

On 3 March 1821 Tamar  came into Kingston, Jamaica, with the brigantine Jupiter. Tamar had detained Jupiter in the Mona Passage on 23 May after a long chase. Jupiter, of eight guns and 190 men, was flying the Buenos Ayrean flag and did not surrender until Tamar had fired several shots into her that killed one man and wounded another, and that had severely damaged her rigging. A few days later Tamar sailed for Savanilla with Jupiter. 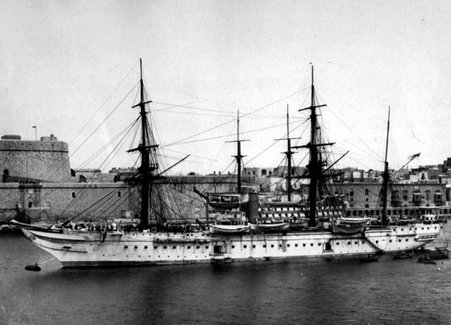 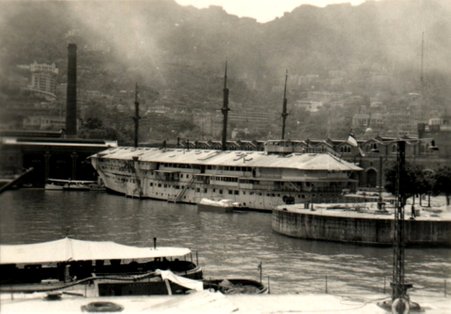 HMS Tamar (1863) The 1863 incarnation of HMS Tamar was the fourth to bear that name, which is derived from the River Tamar, in Cornwall, and the ship's crest is based on its coat of arms. Built in Cubitt Town in East London, she was launched in June 1863, and began her maiden voyage on 12 January 1864 as a troopship to the Cape and China.

Tamar was dual-powered with masts and a steam engine, giving a speed of 12 knots. She originally had two funnels, but she was re-equipped with a more advanced boiler and Mareduced to one funnel.

In 1874, she formed part of the Naval Brigade that helped to defeat the Ashanti War. Tamar took part in the bombardment of Alexandria in 1882.

In 1879, The British Medical Journal reported a group of sailors aboard Tamar were poisoned by a bad pigeon pie which spawned an Admiralty Investigation.

In 1897 Tamar was hulked as a base ship and relieved HMS Victor Emmanuel as the Hong Kong receiving ship. She was used as a base ship until replaced by the shore station, which was named HMS Tamar, after the ship Tamar had been towed out to a buoy on 8 December during the Battle of Hong Kong during World War II. Amidst a curfew of darkness and bombardment by the Imperial Japanese forces, the orders came at 2100 hours on 11 December to scuttle her. She was scuttled at the buoy on 12 December 1941 once it was clear that the advance could not be arrested, to avoid being used by the invading Japanese forces. As the ship's superstructure became airlocked, the ship refused to sink for some time, until the Royal Artillery was called in to administer the coup de grâce.

In late 2014, during dredging work for the Central–Wan Chai Bypass, the remains of what strongly appears to be Tamar were discovered at the location of the old Wan Chai Ferry Pier where she is believed to have been scuttled. A government report, completed in September 2015 but released on the government's website in February 2017, finds strong evidence that the remains are those of Tamar. 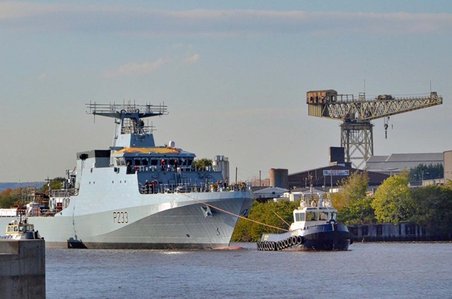 On 6 November 2013 it was announced that the Royal Navy had signed an Agreement in Principle to build three new offshore patrol vessels, based on the River-class design, at a fixed price of £348 million including spares and support. In August 2014 BAE Systems signed the contract to build the ships on the Clyde in Scotland.

The Ministry of Defence stated that the Batch 2 ships are capable of being used for constabulary duties such as "counter-terrorism, counter-piracy and anti-smuggling operations". According to BAE Systems, the vessels are designed to deploy globally, conducting anti-piracy, counter-terrorism and anti-smuggling tasks currently conducted by frigates and destroyers. A £287m order, for two further ships, including HMS Tamar, (P233) and support for all five Batch 2 ships, was announced on 8 December 2016.

HMS Tamar was lowered into the water on 10 October 2018.   This is the seventh ship to be named HMS Tamar.