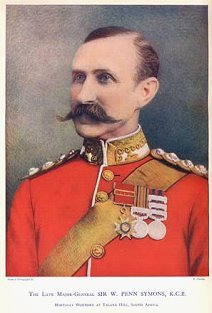 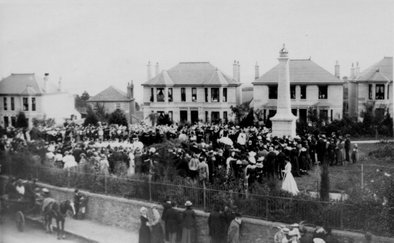 Leaving their horses in a donga, they then hurried on, and having arrived at the edge nearest the enemy Major Hammersley was severely wounded. A moment later, at 9.15, Sir P. Symons, as he was stepping through a gap, was struck down, and turning to Major Murray, he said, "I am mortally wounded." He was then assisted and carried back into camp, and as he was being taken away and afterwards when in hospital, his only question was “have they got the hill?”

Dedication of the Penn Symons Memorial in Victoria Park

He died on Oct. 23rd, a few hours after the Boers entered Dundee. He was mentioned in the despatch of Lieut.-Gen. Sir George White, from Ladysmith, Dec. 2nd, 1899, for his “energy and courage." Sir G. White considered the country had lost “an officer of high ability and a leader of exceptional valour," L.G., Feb. 8th, 1901. The men of the Durban Light Infantry have erected a memorial over the grave of Sir Penn Symons at Dundee, and an Institute in his memory has been built at Umballa, where he was commanding until summoned to Natal in 1899 to take command of the troops there.

Major-Gen. Sir William Penn Symons, K.C.B., was mortally wounded Oct. 10th, 1899, at the battle of Talana Hill, and died three days later. He was the eldest son of the late William Symons, Esq., of Hatt near Saltash Cornwall, was born in July, 1843, and educated privately. Sir W. Penn Symons married Caroline, only daughter of T. P. Hawkins, Esq., of Edgbaston, Warwickshire. He was a good sportsman and fond of hunting, shooting and fishing. He entered the 24th Foot in March, 1863, being promoted lieut. Oct., 1866, capt. Feb., 1878, major July, 1881, brevet.-lieut.- col. May, 1886, brevet.-col. July, 1887. He had his first experience of active service in South Africa, when, as a capt. of the 24th Foot, he took part in the operations against the Galekas in 1877-78, and in the Zulu war during the following year, being awarded the medal and clasp. He next served with the Burmese Expedition in 1885-89 as D.A.A. and Q.M.G., when he organised and commanded the M.I.; also as brigadier-general in command of the Chin Field Force (several times mentioned in despatches, brevets of lieut.-col. and colonel, medal with two clasps). He also took part in the Chin-lushai Expedition of 1889-90, in command of the Burmah column (received the thanks of the Government of India, C.B., and clasp). In 1894-95 he commanded a brigade of the Waziristan Field Force, and was mentioned in despatches and granted a clasp. He then served in the campaign on the North-West Frontier of India under the late Sir William Lockhart, 1897-98, in command of the 2nd brigade Tochi Field Force, and afterwards commanded the 1st division of the Tirah Expeditionary Force (twice mentioned in despatches, K.C.B., and medal with two clasps.) He was appointed brigadier-general in Natal, May 15th, 1889, and major-general just before the commencement of the war. At the battle of Talana Hill, about 9 a.m., Sir Penn Symons, accompanied by Col. Dartnell and Majors Hammersley and Murray, D.A.A.G.s, galloped forward and jumped into a wood, in front of which was the Boer position.