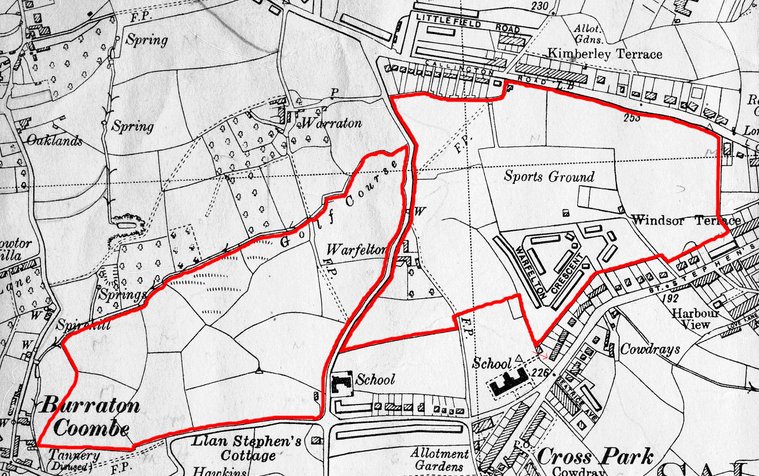 Area enclosed in red that was once Saltash Golf Club

In the early 1920’s a group of people got together to create a golf course on land belonging to Dr. H. 0. Grenfell, who was himself a golfer. In April, 1924 a nine-hole course was opened on land west of Church Road and some little sheds in the garden of Warfelton Farm became the headquarters. Lieut. Sprague was the Hon. Secretary and a young professional, Jimmy Munday, who was trained at the Yelverton Club was engaged.

In September, 1924 a second nine holes were added east of Church Road and the 1st tee was then placed in the corner of the field at the bottom of Cowdray Hill, not far from the entrance to Warfelton Crescent. The new holes were laid out in the fields now occupied by Warfelton, Alamein, the Sports Field and part of the school fields. The scratch score for the whole 18 holes was 68 and there were some good players such as the three Wilkinsons, but there were those of the old guard who still preferred to play away from the town.

9th October, 1926 Mr. F. H. Cun¬nach of Falmouth won The Western Morning News Cup over this course, the control of which had then been taken over from Dr. Grenfell by the members. The Club House was built on the right at the top of Cowdray Hill; in later years it became the canteen of the County School and later a private bungalow.

The building of bungalows had moved the first tee back from the road and after Dr. Grenfell sold this land to the council there had to be some re-arrangement. When building began at Warfelton in 1936 two holes were lost and the school field that now runs down to St. Stephens School was added. The newer nine holes had to be given up as building progressed and the Club was left with the original nine. When part of Longpark Road was widened and building took place, the corner was cut back where it crosses Church Road, so railings were placed there and a wooden pavilion built. The holes were re-numbered once more, making the 400 yard straight the first. This and another 400 yard hole, the second, were the two longest.

Players had crossed Church Road by a kissing-gate that was located where the first house on the Castlemead Estate was built. The shortest hole was the 105 yards in the bog.

The ‘bog’ was an area towards Burraton Coombe where the Forder Stream ran with all its mess of clay and mud. In spite of ditches being dug the two holes on that part of the course were often full of water, there must be many golf balls still on this bit of land.

Originally sheep were used as grass cutters but when this came to an end costs had had to rise to pay for mowers and a grounds man. At the start of WWII the Club petered out and the little pavilion became the H.Q. of the 2nd Saltash Scouts. Here, in what had been the men's room, they carried out the dirty, monotonous job of waste paper salvage for the war effort until the build¬ing was burnt down in 1941. At one time the rest of the building was taken as Officers' Mess for the Argyll and Sutherland Highlanders. The sound of bagpipes during highland dances coming through chinks in the walls provided interest to the boys work¬ing there at the time. 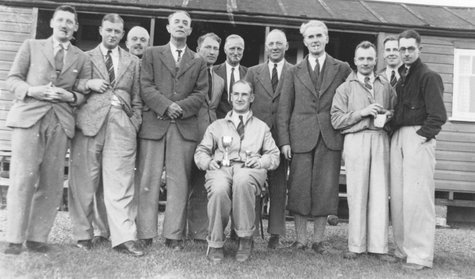 Seated is the winner of the annual Page Cup, H.C. Baker.