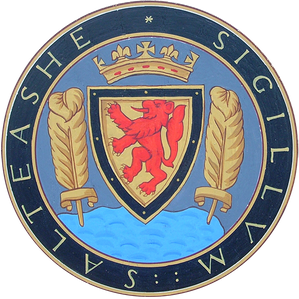 Libery of the Water Tamar Seal

Heralds from the College of Arms made official visits to Cornwall in 1573 and 1620. The main purpose of these 'Visitations' was to register the armorial bearings of families in the county. The devices used by the Cornish boroughs on their common seals were also recorded on each occasion. Unusually, at Saltash the Corporation registered two seals.

One of these was the seal of the Borough of Saltash; the other was the seal of the Liberty of the Water Tamar, a jurisdiction that had long been attached to Saltash. The drawings on the attached sheet were copied from the record made at the 1620 Visitation. By their very nature seals do not have tinctures, so none was specified in 1573 or in 1620. In the inscriptions on the encircling borders, 'SIGILLUM' is the Latin word for 'Seal'.

The Borough seal has a number of significant elements in its design. The shield bears the arms of two Earls of Cornwall who were overlords of Saltash from 1270 to 1300 (Earl Richard, 1270-1272, and his son Earl Edmund, 1272-1300). The prince's coronet may refer to the fact that Earl Richard was a son of King John. The supporting ostrich feathers come from the badge used by Edward the Black Prince, first Duke of Cornwall (created 1337) and his successors, who were also overlords of Saltash. The water at the base denotes Saltash's position on an estuary.

The seal of the Liberty of the Water Tamar depicts a three-masted ship at anchor. This was an appropriate emblem, as the collection of anchorage and buoyage dues within the Liberty (which included Plymouth Sound and the Cattewater!) was one of the rights exercised by Saltash until the jurisdiction terminated in 1901.

The brass matrix of the Borough seal, possibly dating from the 16th century, survives together with a silver container provided for it in 1716 by Mr John Ford, a former Mayor. The matrix was in use until 1886, when an embossing stamp was introduced for sealing Borough Council documents. The matrix of the Liberty seal has been lost. Perhaps it was purloined in 1806, when a mob is said to have rioted and ransacked the Guildhall, for there is no evidence of its use on documents after that date.