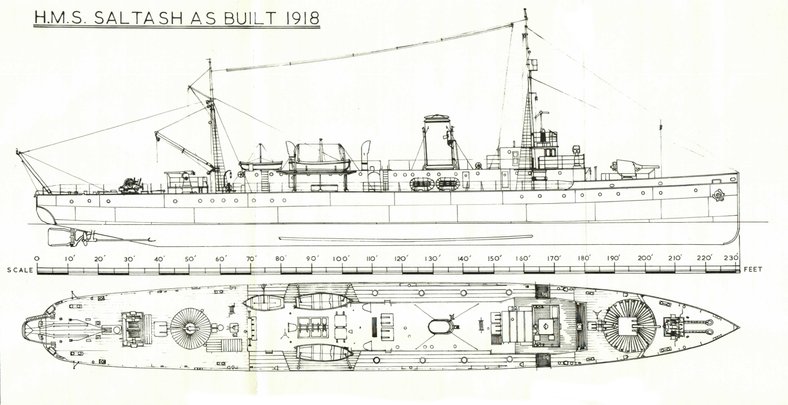 The 710-ton World War II minesweeper/sloop was fitted with main armament of a single 4" gun and a 12 pounder AA gun and could touch 16 knots. Built in Port Glasgow, one of the 'Hunt' class, she was launched on 25 June1918 with a range of 1,500 miles with her bunker capacity of 185 tons of coal. As a coal burner, and, due to their tendency to belch smoke and sparks when least expected, the flotilla slogan was, 'pillars of fire by night, columns of smoke by day'. Reminiscent of the sign that led Moses and the Israelites across the desert following their escape from Egypt. This gave them the nickname of 'Smoky Joes'.

Commissioned less than three weeks before the Armistice, she was too late to make any contribution to WWI, and ended up in reserve at Alexandria, Egypt until 1939 when she was brought forward into the 3rd Minesweeping Flotilla in the Eastern Mediterranean where they patrolled to intercept ships carrying illegal immigrants to Palestine. With the outbreak of WWII she was first employed on contraband control duties in the Eastern Mediterranean and Red Sea for three months before being ordered to return to home waters for minesweeping duties around the east coast, based on Harwich. Three months later she was sent to Rosyth but returned to Harwich when the Germans were advancing through the Low Countries.

At the end of May 1940 she was part of the evacuation fleet that went to Dunkirk. Under continual air attack she first ferried troops out to the larger vessels that could not get close to shore and then, with 499 troops onboard, sustained by a mug of hot cocoa and a slice of bread and dripping, she headed for Margate. On disembarkation the troops were provided with a postcard to send to their next of kin to report their escape, before being dispersed around the country. As soon as their passengers were landed she was off again to the beaches where she embarked a further 359.

HMS Saltash went to the aid of the destroyer HMS Havant which was hit by two bombs and passed over a third as it exploded.  She transferred all her troops to the minesweeper and despite attempts to tow her, HMS Havant finally sank at 1015 on 1 June 1940 with the loss of one officer and five ratings. From a ship’s company of 145, a further 25 were wounded and a similar number of soldiers were killed or wounded.

Apart from the thousands of men left behind were 120,000 vehicles, 2,300 pieces of artillery and mortars, 8,000 Bren guns, 90,000 rifles and 7,000 tons of ammunition and shells. The loss of all that material made Britain particularly vulnerable during the months following the evacuation. The rescue of 335,000 men, when Churchill had been given an 'optimistic' estimate that maybe 45,000 could be saved, was truly the miracle it has been proclaimed.

Having served with distinction at the evacuation, Saltash was again in action off the French coast as one of the armada of 882 warships, 4,000 Landing craft and 1,250 transports at the Normandy landings that numbered the days of World War II in Europe. While sweeping the sea off Normandy, she claimed the distinction of being the only ship in the flotilla not to part a sweep during the operation. After channels had been cleared for the invasion fleet, new minefields were then laid to protect the landing from sea attack. Operation 'Overlord' (originally 'Bolero' in 1942 but later changed), the well known (now) plans for the invasion of Europe, depended primarily on Operation 'Neptune' - the task of safely shipping the hundreds of thousands of troops and equipment to the correct Normandy beaches. With marker signals laid by the midget submarines X-23 and X-24 the naval bombardment of the coastal fortifications (The Atlantic Wall) also depended on a less than glamorous unit - the minesweepers. Fortunately, German intelligence failed to realise that the preliminary minesweeping operations had significantly increased from the routine sweeps that took place throughout the war. The minesweepers' work was not done when the troops went ashore, when the Germans accepted that Normandy was not a raid but the actual invasion, U-boats and aircraft were diverted to the area to lay more mines. Because of the 'sweepers', the enemy was unable to make any significant disruption to the flow of materials from Britain. The hazards of minesweeping can be gauged by the fact that during World War II the Royal Navy lost 343 minesweepers, including 45 of the large Fleet Sweepers and 170 requisitioned trawlers that had been fitted out for sweeping. 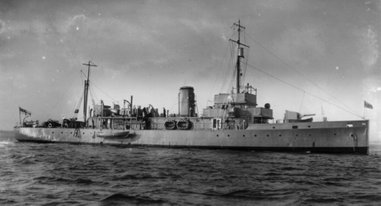 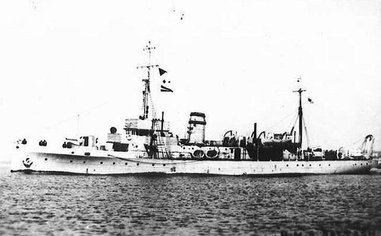 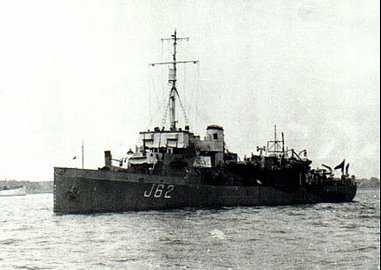 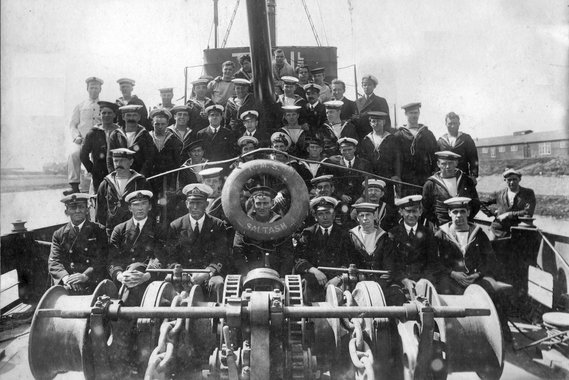 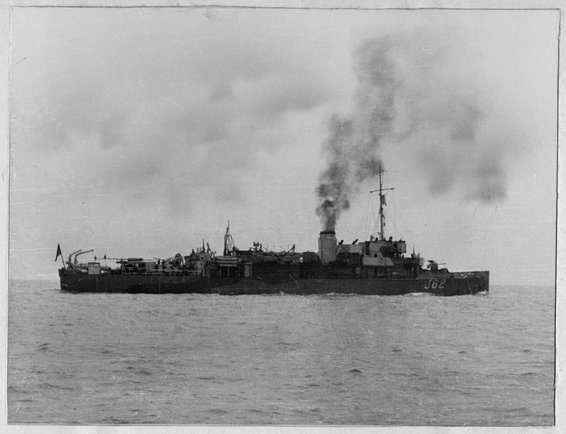