Hanging on the wall in the lower guildhall is an engraving illustrating the construction of the Saltash Bridge at the stage when the centre pillar casing is being floated out to the middle of the river. Recently a talk at Ashtorre Rock given by the Institute of Civil Engineers (ICE) as part of their 200th anniversary made us look again at the image.

Photographs taken from a similar angle some years later show that the perspective is correct and the location of all building is correct. The plethora of small detail is amazing and shows the artist had an eye for accuracy. We suspect the drawing may have been done from a photograph or a number of photographs as it seems to be consistent with one moment in time.

At the bottom corner it says ‘From a drawing by B. Leslie’, so who was B Leslie? 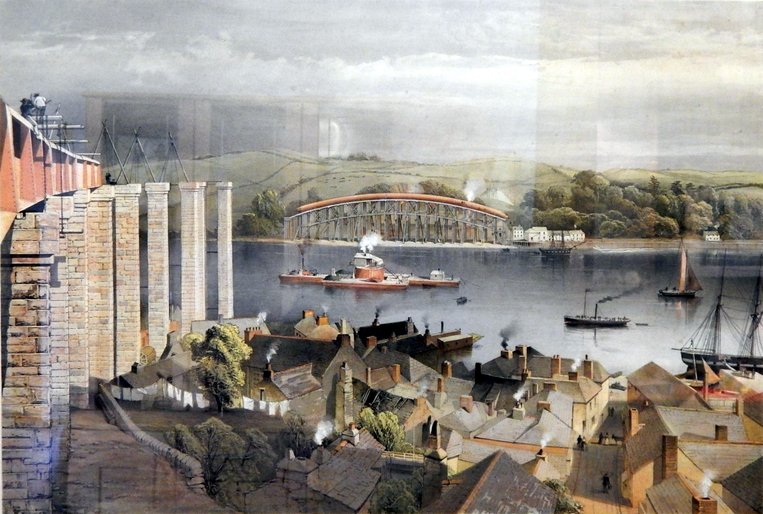 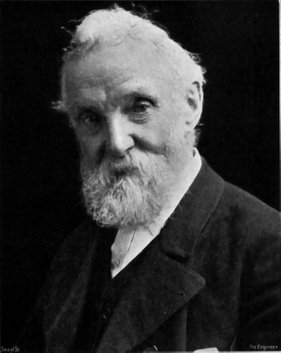 B. Leslie was Bradford Leslie. At the age of 16 he was apprenticed to Isambard Kingdom Brunel, the usual fee of 1,000 guineas was waived in consideration that his father, Charles Robert Leslie, an eminent artist and ultimately Professor of Painting at the Royal Academy in London painted some pictures for Brunel. Bradford Leslie worked with Brunel as Assistant Engineer on the bridge at Chepstow and resident engineer on the Royal Albert Bridge at Saltash. While working on the RAB Leslie was in charge of the sinking of the central 35-foot diameter pier caisson by compressed air as shown in his drawing above. At Brunel’s request Leslie went to London to inspection work on the Great Eastern. He went on to work on projects all over the world. His engineering skills earned him a Knighthood and because of his work for Indian Railways he was appointed a Knight Commander Order of the Indian Empire by Queen Victoria.

He worked well into old age travelling to India to design a railway bridge at the age of 88. He died in London on 21st March 1926 at the age of 95.

While working on the RAB it is believed that Bradford Leslie lived or more likely lodged in Saltash at a house in Culver Rd. If you can confirm this or have any local information about Leslie we would love to hear from you.