Cornish farmer’s son who discovered the planet Neptune by deduction 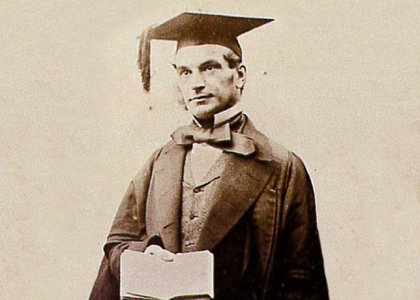 With men having visited the moon, people living in the international space station and satellites circling the earth, it is interesting to look back at a west-country man who in the past contributed to our know­ledge of the heavens, and thus paved the way for the great discoveries of our own time.

John Couch Adams, a Cornish­man, born at Lidcot, near Launceston on 5th June 1819, was the son of a Cornish farmer. It was Adams who discovered the planet Neptune.

Like many boyhood interests, Adams's interest in astronomy came early in his life through a mere chance. He discovered at his home an old book on the subject which had come down to his mother through her family.

His imagination was stimulated as he turned over its pages He started to study the work avidly and from now onwards his eyes were in the heavens. He con­structed a little sundial which he put in the parlour window and he began to watch and note down the solar altitudes with an instrument he made himself out of pasteboard.

His general education started at the village school at Laneast, but his parents managed to send him later to schools in Devonport, Saltash and Landulph.

All his spare time he gave to studying astronomy He used to go to the Mechanics Institute in Devonport and devour eagerly all they had in the way of books on the subject He read all the latest works he could get hold of and drew up a stellar map showing the constellations of the heavens A demon for astronomical calcula­tions, he computed accurately a number of celestial happenings.

The partial eclipse of the sun on 15th May 1835 was, of course, a gala day for this young astronomer. He viewed it from Stoke, Devonport, 'with a small spy-glass'. His account of this occurrence was published in the London papers. Another celestial event which he saw after long and patient watching was Haley's comet. This was on 16th October 1835.

His parents, realising his aptitude and ability, managed to send him to Cambridge where he entered St. John's College in October 1839. His career there was as brilliant as any of the stars he so enthusiastically studied. He became a senior wrangler and was the first Smith's Prizeman. He shortly afterwards was made a fellow and tutor of his college.

He was only 22 when he made the discovery for which he is principally remembered. While studying the irregularities in the movements of the planet Uranus he noticed they were due to the presence of an exterior planet which had not previously been noticed or recognised.

This was the planet afterwards called Neptune. He sent a report of his work and this discovery to the Astronomer Royal, but the latter did not pay much attention to this young astronomer, and put his papers aside without going into them thoroughly.

It is thus rather ironical that when Galle made his discovery of the planet from the Berlin Observatory almost a year later, on 23rd September 1846 the Astronomer Royal already had this information in his hands without being aware of it. 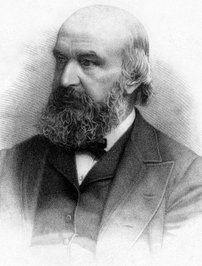 Adams was by now, however recognised as one of the great astronomers and in 1847 he was offered a knighthood, but with modesty typical of him he asked leave to refuse this honour.

The year following, however, the prize named after him the Adams Prize was founded at Cam­bridge to be awarded bi-annually for the best essay on astronomy mathematics or physics. This was specifically founded to com­memorate his "deductive dis­covery" of the planet Neptune.

A year later he was elected a Fellow of the Royal Society. After being professor of mathematics at St. Andrew's University he became in 1858 professor of astronomy and geometry at Cam­bridge. There he lectured parti­cularly on the lunal theory and his tables of lunar parallax com­municated to the Royal Astro­nomical Society in 1852 were brought out as an appendix to the "Nautical Almanac" for 1856.

His intense and accurate study of the moon and its movements were of immense value. He was frequently asked and as often willingly gave his assistance in computing ancient eclipses and other astronomical phenomena. Among other subjects, he took a great Interest in Sir Isaac Newton and he catalogued Newton's manu­scripts which were presented to Cambridge University

So wide was his reputation that a number of foreign societies and associations conferred honours on him. He received an honorary degree from Bologna University in addition to those conferred on him by the British universities of Ox­ford, Cambridge, Edinburgh and Dublin. He was offered the appointment of Astronomer Royal in 1881, but did not accept it.

He died on 22nd January 1892 and was buried in St. Giles, Cam­bridge. A portrait medallion was placed in Westminster Abbey close to the grave of Isaac Newton and a portrait of him painted by Sir Hubert von Herkomer is at Pem­broke College, Cambridge. Nearer his home a memorial tablet was placed to the memory of this great Cornishman in Truro Cathedral.

He was a man of great sympathy and generosity. None of the honours, praise, or recognition which came to him changed or im­paired his modesty and sin­cerity. He possessed the natural simplicity and open directness of a truly great man. 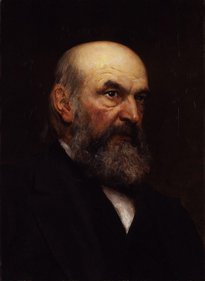