Have you ever been asked the question, “if you could travel back in time where would you go?” Well, for me, there is no doubt that I would love to take a walk down the Waterside in the mid 1800’s. I can imagine, coming down narrow Silver Street into a bustling Tamar Street full of life. People selling shellfish from their windows, ferry passengers disembarking, men falling out of one of the beer houses and a myriad of other people coming and going. Perhaps you would meet Ann Glanville with her 10 children, or the 16-year-old William Odgers running amok in and out of the Union Inn (before later becoming landlord himself). If you went back a bit earlier in time you may happen to meet, a lesser known yet just as important, formidable mother and daughter team; Mary Blake and Mary May going about their daily lives. You may pass them by without a second thought, but a lot was certainly thought of them by a group of people, namely the Plymouth Royal Marines.

Skip ahead to today and if you visit St. Stephens churchyard you may be fortunate enough to come across their headstone, as I did myself. If you stop and read the inscription a marvellous story begins to emerge. 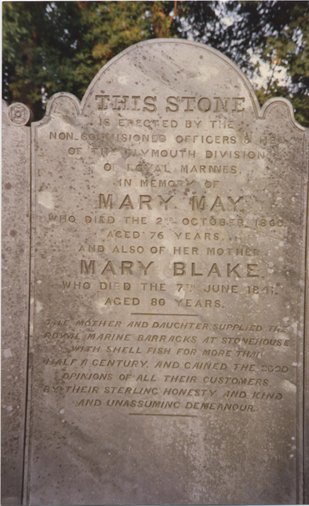 is erected by the non-commissioned officers and men of the Plymouth Division of Royal Marines,

The mother and daughter supplied the Royal Marines Barracks at Stonehouse, with shell fish for more than half a century, and gained the good opinions of all their customers by their sterling honesty and kind and unassuming demeanour”

Mary Blake was born in Saltash in 1761. George III had just come to the throne, and wasn’t yet mad! Saltash was a thriving trader town dependent on the river and on the ferry.  Times were tough, many families shared houses, living on top of each other, with basic sanitation and no internet! Through the next few decades Mary watched the town grow, roads were improved, fine town houses erected, the Market House (Guildhall) was rebuilt and (with some local resistance) a Baptist church was founded. She also brought up her daughter Mary May who was welcomed into the family in 1784. Mary, like all the other Watersiders, had to make a living, so she took to selling shell fish. Around the turn of the century, she began supplying the Stonehouse Marine Barracks and the Royal Naval Hospital. Her daughter Mary May joined her and the double act continued their supply. This was particularly comforting to the men who were recuperating from the effects of their time fighting in the Napoleonic wars. I can imagine this taste of home raised their spirits! After many years of making the journey across the river to Stonehouse and back, laden with shell fish, it was almost time for her final journey. Mary Blake died Thursday 7th June 1841 at the incredible age of 80. On Sunday 13th at 4 p.m. eight privates turned up to take her to her final resting place. They were followed from the Waterside to St Stephens Church by family and friends, the band, non-commissioned marines and privates. This incredible scene undoubtedly resulted in more followers up to the church. After the minster’s lesson, the band played the Dead March in Saul and a firing party of 19 fired volley shots over the grave. Accounts say there were up to 3000 people who turned up to watch this unusual service.

Diligent Mary May continued the vital delivery and sale of shell fish to the grateful marines. In 1849 there was a second large outbreak of cholera in Plymouth and the surrounding areas. It was discovered on an emigrant ship and spread quickly through the overcrowded and unsanitary areas. The men in the marine barracks didn’t escape unscathed from the vile disease and apparently blamed it on the beer in the canteen. However, not even a cholera epidemic would stop Mary May from her trade at the barracks. She continued her work, offering her fresh food to those lucky enough to return from the Crimean war. She was living in a transforming and burgeoning town, the population was growing, as well as the list of trades. There were butchers, bakers, shoemakers and tailors establishing themselves in new 2 and 3 story buildings lining Fore Street, joining the abundance of well-established generational fishermen and women and boat builders. She would have enjoyed the Saltash regatta, which had started in 1835 and maybe taken advantage of a pleasure cruise on the river!  The biggest change to the landscape as well as town prospects was the construction of the Royal Albert Bridge. Perhaps she was among the crowd of 20,000 people estimated to have watched in awe the first truss being floated out. Possibly, she even experienced the fanfare of Prince Albert opening the bridge in 1859 (unlike its designer Isambard Brunel, who was too ill to attend). On Tuesday 2nd October 1960, after only a little over a year of living in the shadow of the Albert bridge, Mary May died.

Like her mother before her, on the day of her funeral a large troop of marines, along with the band led a procession from her Waterside home up to St. Stephens Church. The band again played the Dead March in Saul on their instruments which were covered with black crepe. A train with 15 coaches, river steamers and numerous water boats transported people to pay their respects, or just to watch the bizarre spectacle. It was said that almost 4,000 people turned up that day.

So, it brings us back to the original question of why were two ordinary Waterside women interred at St. Stephens with full military burials? Due to a lack of information we will never truly know. The limited records of grave inscriptions, censuses, newspaper articles can only give us a small insight into someone’s life. We can assume things about the way they lived due to social history of the times, and we can also assume these women loved, lost, laughed and cried. But there is no doubt they were tough, hardworking women who provided for their families.

I would like to offer my own idea on how it happened from one piece of evidence. This extract was taken from the Plymouth, Devonport and Stonehouse Herald, 19th June 1841

During her time of visiting these places …(the barracks) …she had a desire that after her demise her remains might be borne by and followed to the grave by the Royal Marines of the Plymouth Division. Through her regular attendance and honest principles during the whole of the period above mentioned, the Colonel Commandant was pleased to meet her request and the general wish of the men present at Headquarters.

Through my time researching and reading, I have created a persona of Mary Blake and can quite imagine her joking with the Colonel Commandant about her wishes one day. He and the other men obviously thought a lot of mother and daughter and a relationship lasting half a century cemented these sentiments. I feel that they wanted to honour an honest woman’s wish and repeated the act for Mary May, who continued bringing fresh shell fish to the hungry marines for many years after.

In St. Stephen’s ancient churchyard there are headstones large and small

Monuments to local worthies that can be read by all.

To the memory of two women, Mary May and Mary Blake.

More than fifty years they laboured claiming rights from days of yore.

To gather shrimps and shellfish from the seas around Ashtorre

Which they seasoned to perfection and were held in high degree

By the folks in Stonehouse Barracks, men who fought on land and sea.

Men who sailed the seas with Nelson, played their part at Waterloo

Gave respect to those who’d earned it by their dealings fair and true.

When in time the last post sounded, back in eighteen forty-one

Then with military splendour in a tribute that’s unique

Came the soldiers from the barracks with their band bedecked in crepe.

As, in step, the soldiers carried one beloved by one and all.

In a final parting gesture, fitting tribute from the brave

The soldiers fired a volley as they stood beside the grave

With weapons more accustomed to be used against a foe

Now fired to mark the passing of their friend of long ago.

In accordance with tradition Mary May her trade did ply

Keeping faith with those returning from Crimea’s frozen wastes

With a dish they’d often yearned for when “hard tack” had took its place.

When at last in eighteen sixty, Mary left her earth-bound shore

With her death the link was broken, and the soldiers came once more.

Now, engraved in simple language on the stone of dark blue slate

Reads their tribute to two women, Mary May and Mary Blake.