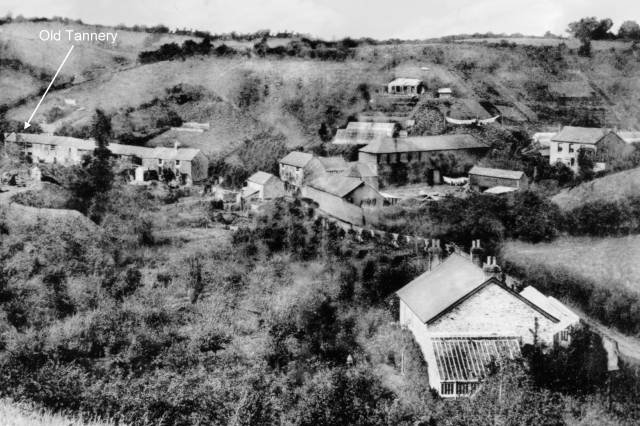 In this view of circa 1900, the original tannery building is at the extreme left.

The second tannery with its long building is right of centre

There were two tanneries in the village. The oldest was on the south side of the lane leading to Tor Hill; it was in existence by 1819. In 1841 it was being operated by Charles Adams, who came from Stoke Gabriel, South Devon. In 1843 Adams had a new tannery built beside the lane that is today called Fairmead Road. A date-stone inscribed "C.A. 1843" can still be seen.

The original tannery continued in use, but before 1861 it was taken over by George Vosper and William Roseveare. It was closed in the 1870s.

Charles Adams died in 1863; he was succeeded by his son Samuel at the new tannery. Circa 1875 the tannery was sold to William Nancarrow, a member of a Grampound tanning family. By 1899 William's brother Thomas had become a partner in the business, which ceased tanning work circa 1910.

In 1968 Mr Clifford Nancarrow, a grandson of William, recalled how the tannery had operated, and provided the following interesting details.

The existing lofty building served two purposes:- the storage of bark and the drying of cured hides.

Near at hand there is clay soil. Before concrete was extensively used, cavities could be made fairly watertight by lining with clay. Near at hand also are two streams which join a short distance from the tannery. Eight large cavities (called "pits") measuring 12' x 12' x 12' contained liquor made by steeping crushed oak bark in water. Some thirty smaller pits (many of them under cover) were used for curing hides.

Bark, especially coppice bark, was bought in the Glynn valley, put on railway wagons at Doublebois or Bodmin Road stations and brought to Saltash Goods Station. Bark was also bought at Lopwell and at Sheviock Woods, put in barges and brought to Antony Passage, from where it was carted in wagons by local farmers (such as the Dingles and Battens) a ton at a time under ropes. Boys followed the wagons to pick up pieces which might fall off. The bark was "rinded", done up in bundles weighing about half a hundred weight and bound with hazel "beams".

Hides were bought from butchers as far away as Yealmpton, Liskeard and St Austell, and brought to the tannery by water or by goods train. Hides were cow or horse; later, sheep and calf hides also were used, and sometimes pig. When hides could not be quickly put into the pits, they were salted and stacked.

Terra, a chestnut dye, was obtained in bags. It had to be broken down, dissolved in hot water and placed in the pits to give the leather the desired colour. The hides were first treated with lime. This facilitated the removal of hair by very sharp knives. The hides were put into the pits, then frequently transferred from pit to pit, the process taking in some instances up to 18 months.

Occasionally sheep skins were cured without removal of wool. These skins were polished and made into fireside and bedroom mats. After curing, hides were dried in the upper part of the high building, which was fitted with shutter boards that could be opened or closed according to the weather. The hides were slung over poles. They were then trimmed, polished, rolled, tied up and sent to Bristol, to Blank of Plymouth, to Head or Vosper of Saltash, Blight of Trematon and Walker of Landrake. Some pig hides were sent to London; others were used locally for saddles and for leggings.

Hair from the hides was spread, dried and sold to builders for mixing with plaster. Waste bark was used for hot-beds in gardens, and also to bank down fires at night. Used liquor was emptied into the stream.

Early in the present century newer methods of curing were introduced in this country. The Burraton Coombe Tannery did not adopt them. Gradually business declined. On returning from military service in 1919, Mr Clifford Nancarrow decided not to revive the business.

The buildings were subsequently used for various commercial purposes. They were converted to residential use circa 1990