In connection with the demolition of the Wheatsheaf at Saltash Waterside thoughts turn to the pending archaeological survey of the site, in particular the Civil War Battery that was once thought to be located in the area.  One clue is that there was a Public House on the Waterside just to the left of the Wheatsheaf and slightly further inland called ‘The Battery’. Records revealed very little but the Ordinance Survey Map of 1856 shows the location of the building. 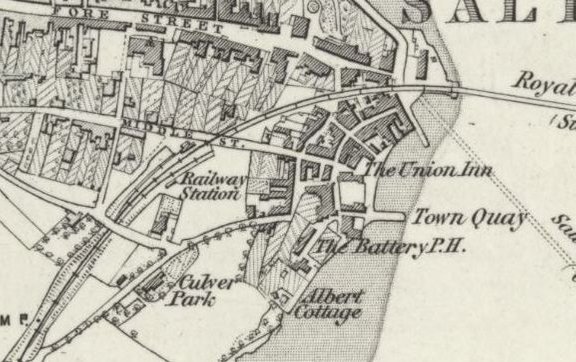 I don’t know how the survey decided which structures warranted mention on their maps as the Passage House Inn and the Wheatsheaf, the two largest inns on the Waterside are not individually named, but luckily for us the Union Inn and the Battery Public House are.

A look at the maps for 1883, 1896 and 1908 all show the building still in situ but none give its use. The site became part of Saltash Gas Works but later maps also show a building at the same location up to the 1950’s but nothing after the clearance of the late 50’s. This would suggest that the building itself may have survived as a structure in some form until then.

Does it shed any light on the location of the Civil War Battery? Not really except that there was probably a battery in the area.  They were usually located very close to the water’s edge and at prominent points to give the widest arc of fire. The location in front of the Battery Inn had a clear view across the river but also down the river to the Hamoze. Its field of vision would have crossed with that of the battery near Wearde Quay.

There is some speculation if and how thorough any archaeological survey will be, but hopefully it will provide some answers