Callington has long felt the need of railway communication. In years gone by it was a busy mining centre, and though the mining industry is not what it was, the town is still an important little place towards which the trade of a large and fertile agricultural community naturally gravitates. Two or three abortive attempts have already been made to construct a railway to it. Sometime in the 1860’s there was a scheme for making a line to Saltash. That fell through unfortunately, and in later years a similar project shares a like unhappy fate. At another time there was a hope that the South-Western line to Plymouth might cross the Tamar, and run down the west bank of the river. This idea was unrealized. It was found to be impossible to ignore the interests of Tavistock as was contemplated in that scheme and the railway when made took its course along the Devonshire side of the Tamar. Thus it happened that Callington notwithstanding that it once got up some festivities over the cutting of the first sod of the railway which was to be – is still without the means of cheap and rapid communication with the great markets of the country. Now, however there seems a distinct probability that the scheme which has been placed before the public for constructing a light railway from Callington to Saltash to a successful conclusion. The proposed line which joins the Great Western line near the goods yard at Saltash station, will, it is estimated cost about £5,000 per mile to construct. This will give for the 10½ miles a total cost, roughly, of £55,000, in addition 70 acres of land will be required, which, it is thought ought not to cost more than £6,000. 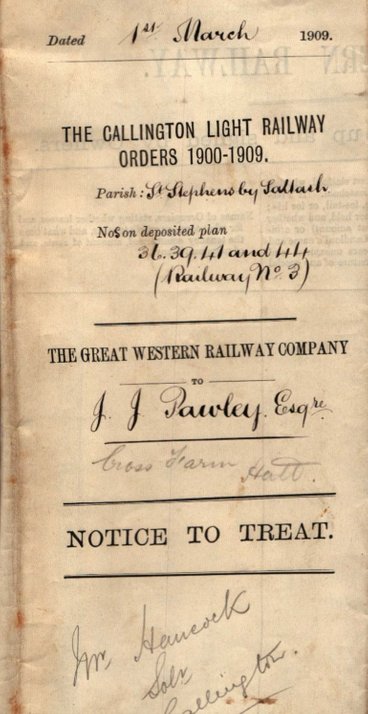 Some changes have been made in the proposed route since the scheme was tentatively placed before the public. After leaving Saltash station, the line will pass under the St. Stephens road and a little further on will go over the road at Burraton by means of a level crossing. At this place about a mile from Saltash, the first stopping place will be made, a second will be at Notter, about three miles from the junction. Passing Botusfleming, and running under the main road near Viverdon Down, the line will approach St. Mellion. From this point it will make a divergence from the route originally suggested and will trend eastward so as to serve the interests of St. Dominick, one of the most fruitful spots on its route. There will be another stopping place for St. Mellion and St. Dominick, but the exact position of it has yet to be determined. After going under the main road from Callington to Tavistock the line will enter the former place on the north side of the town. There will be some rather heavy gradients, the average being about one in fifty. Apart from this the engineering difficulties are not serious; the Great Western Company are understood to regard the project favourably, and next session it is proposed to apply to Parliament for the necessary powers.

The CHAIMAN remarked that enough had been said in the past on the abstract question of the value of railway communication in a district like that, and all they had to do was to consider whether it was possible to secure such communication between Saltash and Callington, and to approve provisionally of the scheme which would be submitted to them. Combined effort was imperative, and there were unfortunately many expenses to be incurred before they could make any progress towards the realization of the scheme, the requisite Parliamentary powers being very expensive. The proposed “light railway” would serve as an important feeder of the Great Western Railway, and on this ground they hoped for valued assistance from that company after the scheme had been sufficiently matured for them to give it consideration in detail. There ought to be little or no difficulty in securing the necessary parcels of land, and he believed they would be acquired, as they ought to be, at their agricultural value. He considered it very fortunate that Mr. Meik was able to place himself at their service, for he had an experience in connection with such lines as few engineers possessed. Of course, neither Mr. Meik nor anyone else could give them an exact idea of the cost because a great deal would depend on what was done in regard to such matters as level crossings and the accommodation of both passenger and goods traffic. They could not expect the accommodation which they found on the main line. They would aim at affording facilities for the conduct of the important industries, and more than that they had no right to aim at. 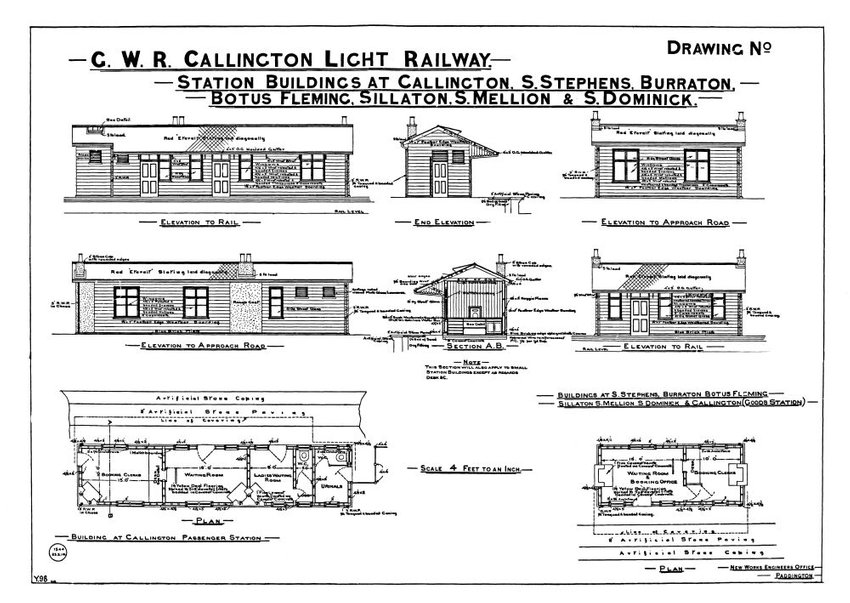 Mr. Meik explained that though the line would be a “light railway,” it would not be desirable to construct in the district a line of less than ordinary gauge. A narrow-gauge line would be somewhat cheaper, but, on the other hand, the transfer of goods at the junction would add very materially to the cost of transport, and the saving in construction would be more than lost. The proposed line would have no stations except at the terminus, and at the intermediate stopping places they did not propose to go to the expense of a station-house and a stationmaster. They wanted them to look upon the railway more or less as a tram line. As to the level crossings that was a question for the district. Where there were few trains and not much traffic on the roads, level crossings were not a great inconvenience, but as between them and the making of bridges, there was a very great difference in cost. They hoped to make satisfactory arrangements with the Great Western Company for the use of their rolling stock so that capital would not be required for rolling stock. Many alternative routes had been suggested, but that selected was believed to be the best. There might be as many as eight or ten level-crossings altogether.

In reply to questions, the CHAIRMAN said he hoped someday the line would be continued to Launceston, going through

Linkinhorne. – Mr. Meik: The line is laid out with a view to possible extensions. – Mr. RATTENBURY moved: “That having heard the lucid explanation given by Mr. Meik of the proposed scheme for securing railway communication between Callington and Saltash, this meeting approves of such scheme, and pledges itself to promote it to the best of its ability,” In his opinion the proposed railway was the only chance for the salvation of Callington. – Mr. J. W. Lawry seconded, and Mr. Hambly having supported, the resolution was carried unanimously. The following were elected to a Provisional Committee to give effect to the resolution:- The Earl of Mount Edgecumbe, Messrs. Digby Collins, D. Horndon, N Coad, E. P. Kittow, S. P. Rattenbury, J. W. Lawry, F. R. Rodd, P. Hambly, J. W. Dingle, H. Davis, and the Portreeve (Mr. J. Brendon), with Mr. E. L. Marsack as secretary.