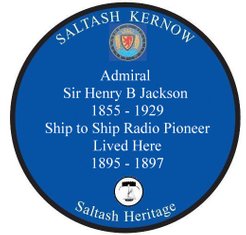 In the 1880s the Admiralty decided that the Devonport naval base should have a torpedo training facility (there was already one at Portsmouth).  The site chosen for it was in Cornwall, in the lowest reach of the Lynher estuary.

The Royal Navy had in reserve a 5,000-ton wooden warship, HMS Defiance, powered by sail and steam but never armed (she would have had 91 guns).  After conversion into a ‘school-ship’ at Devonport Dockyard, in 1886 Defiance was moved into the Lynher and permanently moored on the northern side of the river, off Wearde Quay.  Subsequently other obsolete naval vessels were added, all linked by walkways.  Officially they lost their original names, becoming part of “HMS Defiance”, but staff used their old names informally.

In 1895 a new commander, Henry Jackson, was posted to the establishment.  In addition to his normal duties, he began experimenting with ‘Hertzian waves’ for communication purposes.  He gradually made progress, so that by Autumn 1896 the world’s first ship-to-ship wireless telegraphy (i.e. radio contacts) took place in the Lynher estuary, adjoining the parish of St Stephens-by-Saltash. 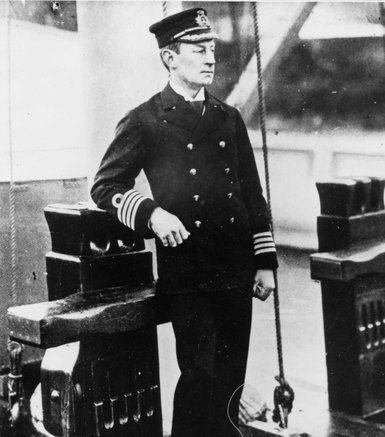 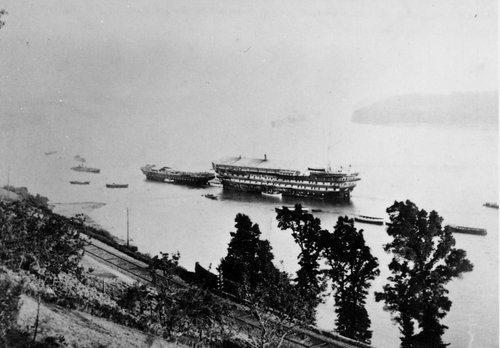 In this early view, circa 1888, the school-ship HMS Defiance has only the hulk of the former HMS Perseus, a 1300 ton sloop, attached.  It was added to provide accommodation for mine-laying instruction.  A torpedo-boat is moored ahead of the Perseus.  [In the foreground is the broad-gauge track of the Cornwall Railway.]

Henry Bradwardine Jackson joined the Royal Navy as a cadet in 1868, just before his 14th birthday.  He was trained on HMS Britannia, Dartmouth (then still a ship).  By 1878 he had reached the rank of Lieutenant.  In 1881 he joined the staff of HMS Vernon, the torpedo school-ship at Portsmouth.  He became very interested in electronics, and also realized that the Navy had problems with signalling, particularly at night.  He began to consider the use of “Hertzian waves” to assist with night-time identification of ships.

Having been promoted to Commander in 1890, Jackson was posted to HMS Defiance in January 1895.  After he had settled in, he began a series of experiments, aiming to use Hertzian waves for true communication (rather than simply signalling).  He made a spark transmitter (using an induction coil taken from a toy!) and a crude receiver, which didn’t perform well.

Jackson was promoted to Captain in June 1896; he is seen here on the rear deck of HMS Defiance. 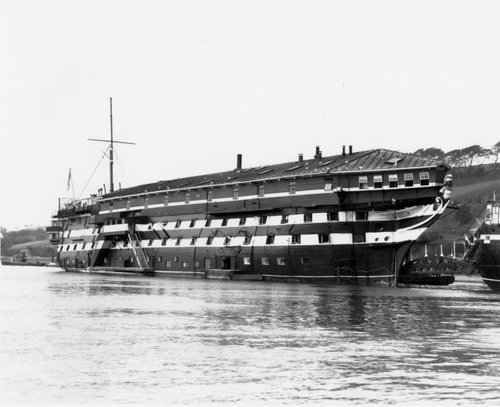 This view shows how the Defiance was adapted.  Class-rooms etc. were created on the top deck, and platforms were added at river level to give personnel easy access and to bring in supplies.  The complex was served by pinnaces and other small boats for journeys around the practice areas, and to Wearde Quay and Devonport Dockyard stores. 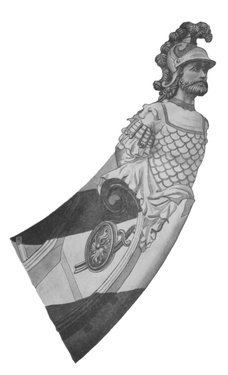 When this vessel was ultimately scrapped, the figurehead (on bow at right) was saved.  It is now displayed in the Dockyard. 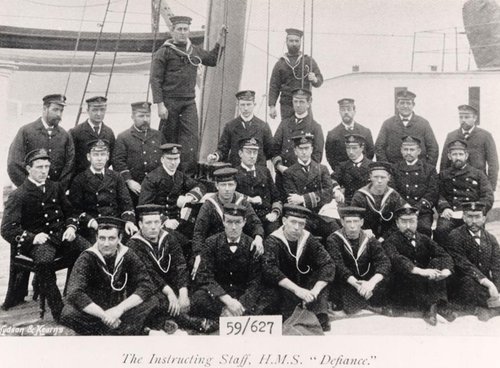 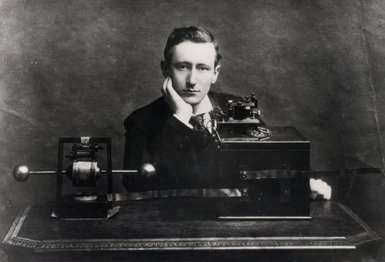 In July 1896 Jackson built a new receiver.  By the end of August he and his staff were transmitting and receiving Morse Code signals over the length of the vessel.  Bulkheads etc. didn’t cause any loss in strength.  At last he was gettingsomewhere, but he didn’t know that a young Italian had advanced further, and had already filed an application for a patent - in England!

Late in 1894, at the age of 20, Guglielmo Marconi had begun experimenting on his father’s estate near Bologna.  By the end of 1895 he had succeeded in transmitting and receiving radio waves over a range of 1½ miles.  He was convinced that his system could, with development, revolutionize communications.

However, he received no encouragement in Italy, so in February 1896 he took his equipment to London, where this photograph was taken.

He met the chief engineer of the British Post Office, and staff in the War Office and the Admiralty.  At a War Office conference in September 1896, Henry Jackson met Marconi for the first time.

Jackson and Marconi realised that, independently, they had been working on similar lines, although Marconi’s apparatus was more advanced technically. However, it appeared that Jackson had made the most progress as far as aerials were concerned.  Later, they became firm friends.

In autumn 1896 Jackson redesigned his aerials and mounted his transmitter in the gunboat HMS Scourge. Scourge was an Ant Class, one-gun, iron screw gunboat built at Chatham Dockyard and launched 25-Mar-1871, she was attached to Defiance as a tender.  As a result, he increased the radio-contact range to 1,200 yards.

By spring 1897, after Jackson had built a new transmitter, the signals could be received from Scourge wherever she went in the estuaries, whether it was 2 miles up the Lynher (she was too big to go any further) or 3 miles down the Hamoaze at Cremyll. 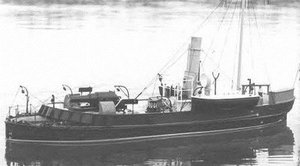 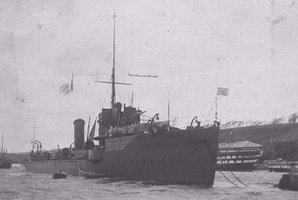 A later tender showing radio aerials with Defiance behind 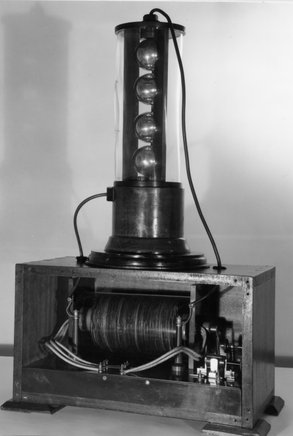 The last transmitter which Jackson built on HMS Defiance

During a demonstration arranged for Devonport’s Royal Navy Commander-in-Chief on 20th May 1897, it was used to transmit an extract from that day’s edition of “The Times”.

In that early period, all messages were sent in Morse Code. There were no speech transmissions by radio until nearly 20 years later.

How the transmitter and receiver worked 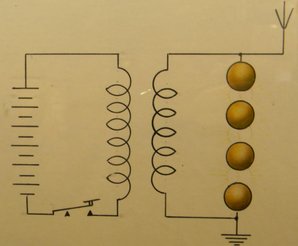 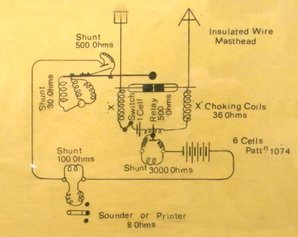 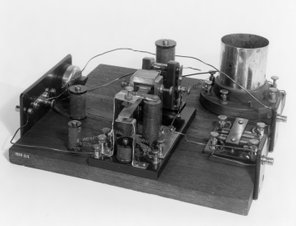 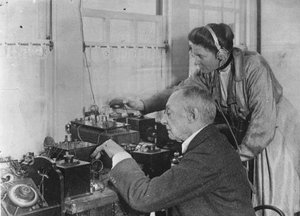 After he had completed his active service, Jackson was able to spend time at home on Hayling Island, near Portsmouth, where his favourite pastime was experimenting with radio and electronics.  In this he was joined by his wife, Alice (daughter of Samuel Burbury, a prominent mathematician who published work on electromagnetic theory).

Admiral Sir Henry Jackson died at home on 14th December 1929; he was 74.  His grave is in St Mary’s Churchyard, South Hayling.

This equipment consisted of an induction coil with a key to make and break the supply to the primary winding. The secondary winding was attached to the two outside members of the four brass balls forming a Hertz oscillator. The bottom brass ball was earthed,

and the top ball was connected to the aerial.

Pressing the key allowed current to flow in the primary winding, inducing a voltage in the secondary winding, which caused a spark to jump between the four brass balls of the oscillator, resulting in electromagnetic waves radiating from the aerial.

The radio receiver that Jackson used on HMS Defiance in 1897.

By May 1897, Henry Jackson had a maritime radio installation working satisfactorily.  Two months later, Guglielmo Marconi installed a radio set in a ship for the first time.

In October 1897, Jackson set up a permanent radio link between Defiance and the Port Admiral’s House at Mount Wise, Devonport.

During his naval career, he was given many foreign awards, including the Grand Cross of the Spanish Order of Naval Merit, the Japanese Order of the Rising Sun, and the Russian Order of the White Eagle (1st class). He was also a Grand Officer of the French Legion of Honour.

Jackson was elected a Fellow of the Royal Society in 1901. The following year, he wrote a paper for the Society entitled: On some phenomena affecting the transmission of electric waves over the surface of the sea and earth.

He received a knighthood (Royal Victorian Order) in 1906, and another (Order of the Bath) in 1910!  In 1920 he was appointed the first chairman of the government’s Radio Research Board.