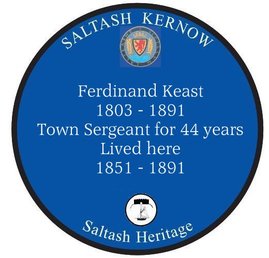 One of the most prominent blue plaques in the planned Saltash  Blue Plaque trail will be for one of the great characters of Saltash - Ferdinand Keast, known by everyone in the town as ‘Nandie’.

Keast was a tailor by trade but on 21st September, 1846, Keast was enrolled town sergeant, carrying the offices of verger to the St. Nicholas Church, town crier and official bill poster. He was senior sergeant when the Borough of Saltash held its full ‘Water Tamar’, or Silver Oar jurisdiction over Plymouth Sound, the Hamoaze, and the rivers Tamar and Tavy,’ extending through twelve parishes - a distance of twenty miles. 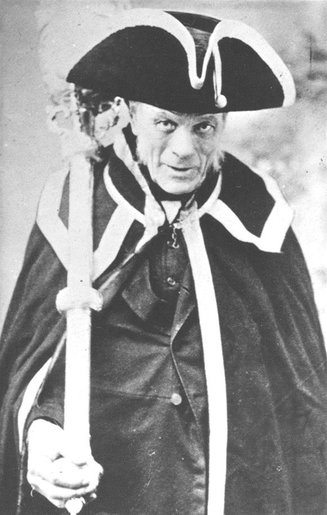 Bearing a silver oar as a symbol of his authority, and armed with a substantial oak truncheon Keast was often called upon to exercise his authority. This also included arresting fugitives and criminals on board vessels, a duty which he performed with tact and courage. In the event of opposition or attack, he would follow up a rap with his truncheon by butting at the delinquent with his head, this was generally conclusive.

It is recorded that on one occasion, quite alone he took five mutineers from a ship in the Sound, and marched them all the way to the Saltash lock-up.

Nandie Keast was a well-known character over a wide area of the Westcountry and his exploits were legendary. Two pennyworth of rum was his favourite beverage and he always declared, and on several occasions proved, that if he ventured three pennyworth, intoxication resulted.

Nandie firmly believed that his head was harder than any other persons’ and he was in the habit of proving this by cracking Brazil nuts with the back of his head against a door’s frame. 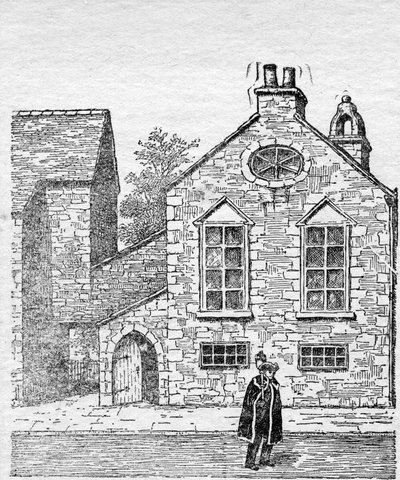 "Nandie" survived three wives, and in his later years resided in the old and abandoned Town Hall over the lock-up, or "Black Hole." This was on the site in Fore Street now occupied by the Essa Club.

His funeral was attended by a large crowd. Almost every member of the Cor¬poration was present, and acted as bearers from the church to the grave.

Unfortunately at his funeral the grave was a little too small and the coffin could not at once be lowered. The youths, who always went in awe of Nandie, at once rushed home and spread the report that Nandie, who was of a dogged nature, would not "go down" but kept bobbing up and asking for two pennyworth of rum!

After Nandie’s death the old Guildhall, Town Hall, or Black Hole, was not used and became so dangerous that it was taken down. Nobody but Nandie and his prisoners had used it for years.

The name ‘Keast’ now lives on in Saltash with the newly refurbished passage way from Fore St. to the Co-op car park being named "Keast Mews"

But the last words must be left to 'Nandie Keast'

For if you’re naughty

Drawing of the old Guildhall/Town hall and town gaol